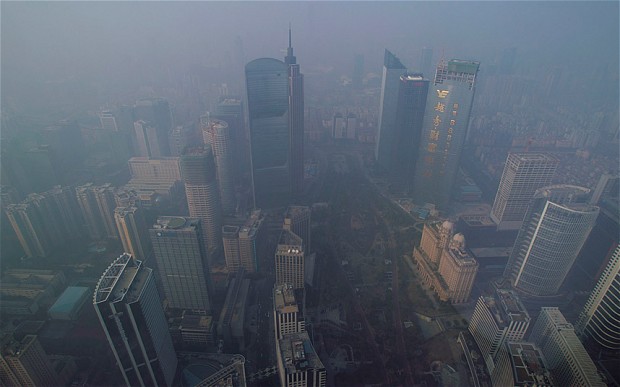 At Bloomberg Christina Larson reports on the dramatic rise of cancer in China:

A recent report from the World Health Organization shows an alarming rise in the number of cancer cases diagnosed worldwide, with developing countries particularly hard-hit. “As a consequence of growing and aging populations,” WHO noted in a statement, “developing countries are disproportionately affected.” According to the World Cancer Report 2014, each year 14 million new cases of cancer are diagnosed globally and 8.2 million people die annually from cancer. China, which is home to roughly a fifth of the world’s population, accounts for 27 percent of global cancer deaths.

Lung cancer is the most common form of cancer worldwide. In 2012, more than a third of deaths globally from lung cancer happened in China, which produces 40 percent of the world’s cigarettes and where increasing public concern about toxic urban smog have created a market for home air-pollution filters in large cities such as Beijing. Late last year, Chinese President Xi Jinping launched a campaign to crack down on officials smoking in public, hoping to set a healthier public example. Also last fall, China’s State Council released an ambitious Action Plan for Air Pollution Prevention and Control; whether it will have a significant impact remains to be seen. [Source]

Tom Phillips adds in The Telegraph that “millions of lives will be unnecessarily lost to soaring rates of respiratory disease and lung cancer unless the Chinese government takes determined action against air pollution”:

Bai Chunxue, the head of respiratory medicine at Shanghai’s Zhongshan Hospital, said that while smoking was still the main culprit for skyrocketing rates of lung cancer and chronic obstructive pulmonary disease (COPD), the dangerously high level of air pollution was taking an increasingly devastating toll on Chinese lungs.

“If air pollution is not reduced we will have more and more respiratory disease, including lung cancer, COPD, asthma and even pneumonia and also heart disease, coronary heart disease,” warned Dr Bai, who is also chairman of the Chinese Alliance against Lung Cancer and the director and founder of the Shanghai Respiratory Research Institute.

He singled out the level of fine dust particles with a diameter of 2.5 micrometres or less – known as PM2.5 – as especially dangerous because of their impact on both respiratory and cardiovascular systems. [Source]

See more on air pollution, and on recent efforts to stem smoking, the failure of previous attempts, and the substantial obstacles to success, via CDT.