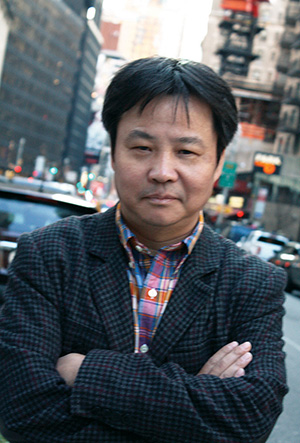 At ChinaFile Columbia University graduate student Zhang Xiaoran interviews writer Yu Hua via email on a wide range of topics including the impact of China’s transformations on his writing, the threat of censorship, and his tendency to use Internet language:

You have been writing about social issues in a very direct way for a long time, beginning in your novels and now also in The New York Times. You seem to have collected hot button issues and systematically put them in your books. Aren’t you worried about getting into trouble?

I may write surrealist and absurdist novels, but that’s because of the increasingly pervasive absurdity of Chinese society. But I’m still a realist writer. Our lives are formed from a lot of different pieces. There are the things that happen to your family and friends, the things that happen in the place you live, the things you hear about that happen in the news…These things surround you. I don’t need to go out and collect them, because they’re the kinds of things you run into constantly in the course of everyday life. Unless you turn a blind eye, you can’t avoid them even if you want to.

I’m not a brave person. I used to have a lot I wanted to say, but I was scared to say it. I hoped someone else would speak up and say it for me. But gradually I came to realize that if everyone thought that way, China wouldn’t have such a bright future. So I told myself that I had to stand up and speak my mind—and I did. I have a lot of hope for China’s future because more and more people are speaking up and criticizing the government.

Will that get me into trouble? I just don’t have time to think about that right now.

I personally think that in the final analysis most of Chinese society’s problems emanate from the political system. But your novels don’t broach that topic. Is that because of censorship or for some other reason? How has censorship affected your writing?

It takes time to evaluate a novel. Decades. At least one decade. So people today may think they are only reading about contemporary social issues, but future readers may perceive my criticism of the regime more clearly. Still, one thing will never change: whether a novelist is facing history or the present, he should approach it novelistically rather than issuing political manifestos.

When I’m writing a novel, censorship is never a consideration. The release of Brotherswas smooth, as was that of The Seventh Day. I may see a lot to criticize in the current system, but you’ve got to admit Chinese society is getting more and more permissive. When The Seventh Day was released some readers worried it would be banned in China, but even more felt comforted that Chinese society was making progress. The same thing happened when Brothers was released.

China in Ten Words couldn’t be published in mainland China because one of the chapters discusses the 1989 Tiananmen crackdown, which is still off limits. [Source]