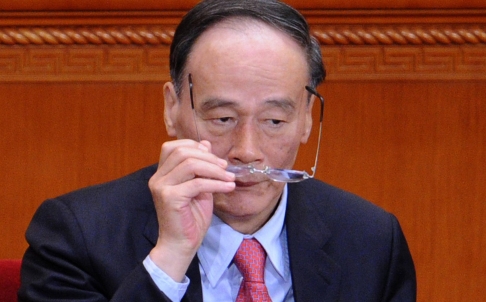 The head of China’s Central Commission for Discipline Inspection Wang Qishan has announced the formation of a new internal affairs branch to investigate corruption and other abuses among its own members, South China Morning Post’s Li Jing reports:

“The Central Commission for Discipline Inspection will intensify supervision of inspectors … and will bust any violators, such as those who tip-off investigative targets or abuse power for personal gain when practicing inspection,” Wang told deputies from Sichuan province at the National People’s Congress in Beijing. “One who fails to command himself is not fit to command others.”

Wang’s choice of venue was interesting. In recent months, Sichuan has been a major centre of investigations related to a corruption probe into the political power networks of former public security tsar Zhou Yongkang , who was once the provincial party chief.

Officials suspected of graft usually undergo secret interrogations and detentions before being handed over to the police and prosecutors. The system has long been criticised for encouraging abuse by investigators. [Source]

The AP’s Gillian Wong described some of the excesses of this shuanggui internal disciplinary system in painful detail last weekend.

Officials have also reiterated their determination to catch up with corrupt “naked officials.” From Sui-Lee Wee at Reuters:

Cao Jianming, the head of the Supreme People’s Procuratorate, said China will “work more closely with judicial organs abroad to expand channels and measures to hunt those who have fled and to recover ill-gotten gains”, the China Daily newspaper said.

“Once evidence is sufficient, we’ll initiate the confiscation procedure according to the law,” Cao was quoted as saying.

China has long grappled with the problem of so-called “naked officials”, the term for government workers whose husbands, wives or children are all overseas, have used their foreign family connections to illegally move assets or avoid probes. [Source]