China To Invest Over $162 Billion On Shantytowns 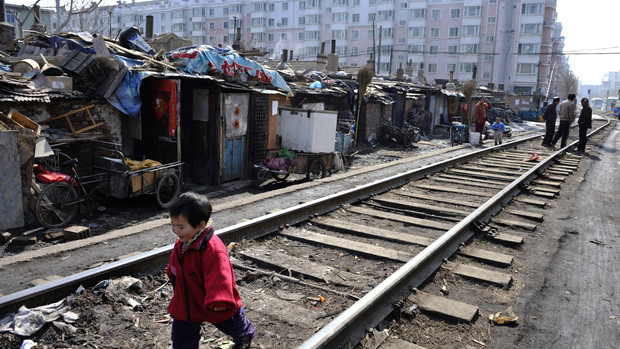 Bloomberg reports that as part of renewed urbanization efforts to place more than 60 percent of its population in urban areas by 2020, China will target more than 4.75 million households with a $162 billion plan to redevelop shantytowns this year:

China said it will invest more than 1 trillion yuan ($162 billion) redeveloping shantytowns this year as the government detailed how it will boost its urban population to support growth.

[…] China will build more transportation links, ease some residence-registration rules and let local governments directly issue bonds, according to the urbanization plan for 2014 to 2020, issued by the ruling Communist Party and State Council.

The plans add details on how China will seek to achieve a 7.5 percent target this year for expansion while sustaining growth through the rest of the decade. Leaders have pledged to speed up urbanization as they try to rely more on domestic consumption for growth and give markets a bigger role in the world’s second-largest economy.

Urbanization is a “strong engine” for sustainable and healthy economic development, according to the text of the plan released yesterday by the official Xinhua News Agency. Premier Li Keqiang said March 13 that tens of millions of people still live in shantytowns, which Xinhua says are areas of dilapidated housing where poor factory workers often live. [Source]

Reuters describes how the 2014-2020 urbanization plan will add to China’s transportation infrastructure:

The 2014-20 urbanization plan released on Sunday aims to boost domestic consumption by increasing the proportion of urban residents among China’s population of almost 1.4 billion to 60 percent by 2020, up from 53.7 percent now.

Among the biggest obstacles to the planned relocation of several hundred million rural residents is the huge infrastructure development needed to accommodate the new wave of city dwellers as well as reform of the country’s “hukou” registration system.

[…] The plan will create “huge” demand for investment in public infrastructure, with authorities seeking a substantial increase in social housing as well as the development of expanded urban underground transport networks by 2020.

At Wired, Ian Steadman elaborates on architectural planning already underway in Chengdu, which will transform an area on the city’s outskirts into the “Great City,” a brand new suburban city:

The “Great City” is effectively an entirely new municipality, designed as one whole instead of the chaotic and environmentally inefficient alternative of urban sprawl. The designers — Adrian Smith + Gordin Gill Architecture, based in Chicago — have marked out a 1.3km2 circle surrounded by 1.9km2 of farmland and parks, where residents won’t need cars because everything is within a 15-minute walk of the city centre. If the model is successful, the Great City will be copied on the edges of China’s other megalopolises and their populations continue to boom — putting pressure on housing, infrastructure and the environment.

The architects claim that the city will be built around the farmland that already exists in the patch of land allocated for the Great City, while within the 1.3km2 city area itself “15 percent of land will be devoted to parks and landscaped space”. Another 25 percent will be allocated for infrastructure like roads (of which only half will be accessible to cars, as many residents will be expected not to need them) and the final 60 percent of land will hold tall, glass-and-steel tower blocks like those found in any other new large development in China. If people need to get out of the Great City, there are public transportation stations on the permiter and in the middle. [Source]

At The New York Times, Ian Johnson emphasizes the importance of other reforms that will determine the success of China’s urbanization plan:

Many urban planners say China’s urbanization plan can only succeed when two related reforms are carried out.

Another is reforming farmers’ land rights. Land is owned by the government, with only usage rights available to be bought or sold. Giving farmers more rights over their land would make it harder for bureaucrats to confiscate rural land.

Both of these reforms, however, are still in the planning phase, according to Tao Ran, the acting director of the Brookings-Tsinghua Center for Public Policy and author of several studies on urbanization. [Source]