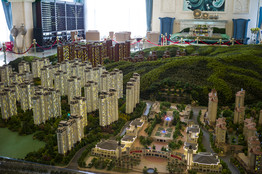 Since coming to power, China’s new leadership has been touting the benefits that increased urbanization would have for economic growth, and many have been quick to point at the pitfalls of this approach. After a recent high-level leadership meeting on urbanization, the CCP announced a new urbanization goal: 60 percent of China’s population will be urban residents by 2020, up from about 52 percent today. This new plan puts priority on a gradual reformation of the hukou system to allow migrants to more easily become official urban residents. The Diplomat explains the “human centered,” “tiered approach,” aimed at answering lingering concerns over China’s urbanization ambitions:

To help address these problems, the CUWC [Central Urbanization Work Conference] announced a “human centered” urbanization policy. Rather than emphasizing the building of new homes and new cities, the top priority will be helping rural residents who have already migrated to the cities win the status of official legal residents. As Xinhua’s English-language report put it, “the primary task is to enable migrant workers to win urbanite status in an orderly manner.” In other words, urbanization will focus first on solving the hukou problem.

The issue of hukous, or residence permits, is the flip side of China’s urbanization dilemma. On one hand, there is the government’s itch to speed up the process, which can result in new cities that have residents but no jobs or stores. On the other hand, many rural residents who head to the cities of their own accord, in hopes of finding better-paying jobs, become second-class citizens. These migrants lack the residence permits (hukou in Chinese) that provide access to local schools and health care. In fact, as the Xinhua article pointed out, many of the Chinese currently counted as “city-dwellers” are not officially city residents because they lack hukous. Reuters estimated that, if these migrant workers are excluded, China’s urbanization rate may be as low as 35 percent.

The problem has received increasing attention in recent years, to the point that even Xinhua, China’s official state media outlet, has no problem calling the hukou system “a major barrier holding back the country’s urbanization process.” The CUWC called for concrete steps to reform the hukou system, but in a tiered approach. In coming years, China will “fully remove hukou restrictions in towns and small cities, gradually ease restrictions in mid-sized cities, setting reasonable conditions for settling in big cities while strictly controlling the population in megacities.” In other words, China will continue to emphasize the growth and development of “small cities” by removing hukou restrictions for these underdeveloped areas. But “megacities” like Beijing and Shanghai will likely continue to have strict limitations on hukous in a bid to fight overcrowding and rising housing costs. [Source]

The South China Morning Post notes that giving hukou reform precedence to small- and mid-sized cities would do little to help today’s migrant workers, the majority of whom are migrating to first tier cities:

The meeting said the registrations would first be made easier in small cities and townships and later in medium-sized cities. But “reasonable conditions” should be enforced for settling in big cities, while the population in mega cities should be “strictly controlled”.

Yuan Chongfa , vice-president of the China City Development Academy, said this might help rural people wanting to move to small cities in the future, but would be of little use to most migrant workers today.

“Most existing migrant workers are living in provincial capitals, the so-called big cities and mega cities such as Beijing, Shanghai and Guangzhou, instead of small and medium-sized ones, which are not attractive to farmers, at least for now,” he said.

“If the ‘reasonable conditions’ and ‘strict control’ in the big and mega cities allow only a small proportion of these people to have household registration, then it means a great number of migrant workers would be expelled, which is unfair,” he said. [Source]

Hukou reform was identified as the foremost priority at the recent work meeting, but the encouragement of more relocation was also addressed, as was the efficiency of land use in cities. Municipal governments in China rely closely on revenue from land development, which means that they collect debt for clearing land in hopes of attracting investment projects and creating jobs, and efficiency often takes the back seat. Development has also been known to trump geographic limitations, as is occurring in Lanzhou, Gansu province, where 700 mountains are being leveled to make room for a new district and hi-tech zone. A report from the Wall Street Journal looks at a similar practice in Shiyan, Hubei province, and notes the problems that can come with debt-fueled land development:

SHIYAN, China—Authorities here worried a few years ago that the local economy was headed for ruin because there was no more space in this remote city, nestled among towering hills, for industry to grow.

The solution? Level the hills.

[…] Shiyan shows the lengths to which Chinese cities are going as they increasingly rely on land, and revenue from its development, to keep growth going.

The strategy gives cities hope for ever more investment and jobs, provided they can lure enough new factories or other projects to occupy the land they are clearing.

It also loads cities with more debt, exposing them to problems if property and export markets don’t keep booming. Beyond that risk is the environmental and social costs from clearing more terrain at a time when popular anger over rapid development and land seizures is growing.

[…]Exactly how much debt China’s local governments have piled up isn’t certain, as figures aren’t regularly tracked. When the National Audit Office last counted in 2010, it put the figure at 10.72 trillion yuan (about $1.76 trillion). Debt has since risen to the equivalent of $2.46 trillion to $4.92 trillion, or 30% to 60% of China’s gross domestic product, according to estimates by government officials and analysts. In the U.S., state and local debt is about 18% of GDP, according to the St. Louis Federal Reserve Bank. [Source]