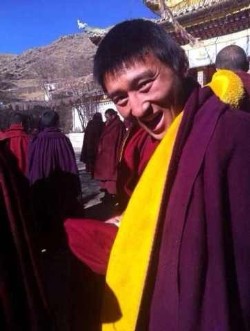 On the sixth anniversary of protests in Tibetan regions, and a subsequent crackdown, two Tibetans have reportedly self-immolated. Their current health status and whereabouts are unknown. From the Voice of America:

Sources tell VOA’s Tibetan Service, Losang Palden, a monk from the Kirtit (sic) Monastery in China’s Sichuan province set himself on fire near the monastery. Chinese security forces took Palden away but it was not clear if he was alive or had died.

A second monk set himself on fire in an ethnic Tibetan area of northwest China. [Source]

Details on the second case are scant, though it was reported by official Chinese media. From AP:

In a brief report citing local authorities, Xinhua News Agency said the monk was from the Shaderi Monastery in Huangnan Tibetan autonomous prefecture in Qinghai province. The report said police were rushing to the site and gave no further details.

[…] A man at the Zekog county public security bureau confirmed the immolation and said it took place outside the monastery. He said he had no other information and refused to be identified. Calls to the county government rang unanswered. [Source]

Radio Free Asia has more details on Palden’s self-immolation, which was carried out on the anniversary and in the same location as a violent crackdown on protests in 2008:

Palden self-immolated on the main road in Ngaba county which was renamed in 2012 by Tibetans as “Heroes Street” after it became a regular venue for burning protests against Chinese rule, according to Tibetan exile monks Kanyak Tsering and Lobsang Yeshi, based in India’s northern hill town Dharamsala.

The monks, citing local contacts, said Palden self-immolated to protest “against the violent crackdown on the Tibetans” on March 16, 2008 in Ngaba when Chinese police opened fire on a crowd of Tibetans, killing at least 10, including one monk. [Source]

March 16, 2014 marks the sixth year since protests by Tibetans in Ngaba in 2008 when several Tibetans died, were tortured or imprisoned in he run up to the Beijing Olympics. Three monks of Kirti monastery had died since 2011 by setting their bodies on fire on the same date (March 16) at the same spot. They were Lobsang Phuntsok (2011), Lobsang Tsuiltrim (2012), and Lobsang Thokmay (2013).

Before setting himself on fire, Palden had reportedly left a text message in his phone in which he prayed for his parents, family members, teachers and relatives. He also called for unity among Tibetans. “We should maintain cordial relations with others, particularly with Chinese because if we are united and have love for each other, no matter what our thoughts are, it will enable us to communicate with each other better,” the message says (translated from Tibetan by phayul). [Source]

More than 125 Tibetans have set themselves on fire in protest in recent years. Meanwhile, at the recently-concluded National People’s Congress, the chair of the Tibet Autonomous Region’s People’s Congress parsed words to downplay the protests. From Time Magazine’s Hannah Beech:

[…] Padma Choling, one of the highest-ranking Tibetan officials in China, said that no self-immolations by locals have taken place under his watch. Exile groups and human-rights watchdogs say at least 125 Tibetans have set themselves on fire since 2009 to protest Chinese state repression.

[…] Technically, Padma Choling is close to right on the self-immolations. Nearly all of the incendiary acts have taken place not in the TAR that he helps command but in ethnically Tibetan areas of three other Chinese provinces: Sichuan, Qinghai and Gansu. And the Tibetan official was careful to stress that no TAR locals were involved, leaving open the possibility of other Tibetans coming to the TAR to self-immolate. At another high-level meeting in Beijing in 2012, Che Dalha, the Communist Party Secretary of the TAR’s capital Lhasa, noted that “only a few cases have happened in the Tibetan Autonomous Region.” Overall, Padma Choling seemed determined to gloss over the situation across the Tibetan high plateau. [Source]