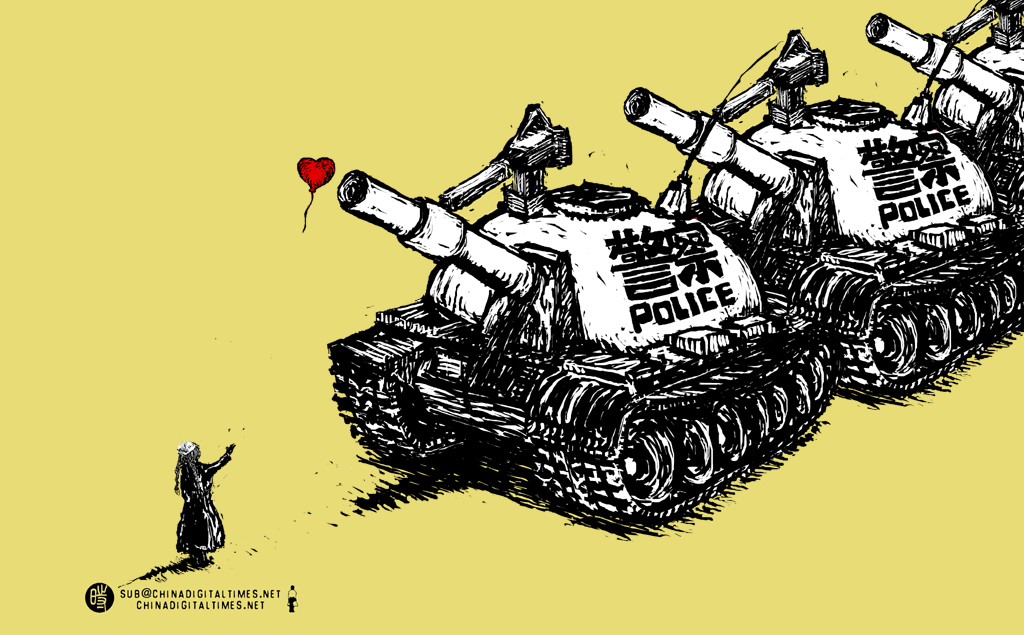 As Russia steps-up its occupation of Crimea, China’s government censors were quick to forbid news organizations from making any connection to China’s own sovereignty “issues.” Weibo comments linking the Crimean referendum with Xinjiang, Taiwan, or Tibetan independence were deleted.

The recently announced plan to increase the number of daily police patrols in large urban areas inspires Badiucao’s Daily Patrol. In it he depicts a Uyghur girl, standing in front of a line of tanks and releasing a heart-shaped balloon.

This week’s word of the week reminds readers to be skeptical should anyone claim they were just out “doing push-ups,” 俯臥撐, (fǔwòchēng): (do) push-ups. The 2008 rape and murder of a 16-year-old girl resulted in the Wang’an Riot, after police claimed the suspected perpetrator (and son of a government official) had been off “doing push-ups.” See also death from drinking boiled water and death by hide and seek.

This week’s Minitrues, or censorship instructions issued to the media by government authorities, include orders to delete an article about living conditions in North Korea, orders to halt coverage of the investigations of Zhou Bin and his family, and from the Central Propaganda Department, instructions that “all media must refrain from hyping or exaggerating the referendum in Crimea.”

Country of the Week: West Korea