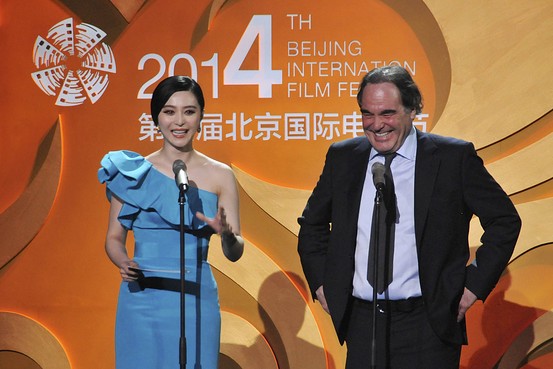 “You talk about co-production in China, but you don’t want to face the history of China,” Mr. Stone said, adding that he had tried to coproduce films about Mao and the Cultural Revolution with Chinese companies since he first visited in the 1990s but had repeatedly “run into a wall.”

“It is about time,” said the three-time Academy Award winner. “You should open up your past the way the United States opened its past.”

Mr. Ning, who was on the judging panel at the festival, said Mr. Stone was just trying to “finding fault” with the Chinese film industry.

“If we want to go to America to shoot ‘9/11’, I expect they would say no as well,” Mr. Ning said in an interview during the festival with the state-run Global Times that was posted online on Tuesday.

“You cannot judge from a ‘finding-fault’ perspective on topics that are sensitive,” he said. “China’s issues aren’t that simple.” [Source]

See also an in-depth television interview with CCTV’s Yang Rui and Stone, who  explores both his approach to covering America’s history through film and reveals his attitudes towards America’s role in the world.

Last August, Stone, in Japan to promote his documentary series, “The Untold History of the United States,” stirred more waters when he told Japan to apologize to China for wartime atrocities in a speech to foreign correspondents in Tokyo:

Japan’s leaders have expressed “deep remorse” over the physical damage and psychological pain the country has inflicted on other Asian countries, but repeated visits by cabinet ministers to a controversial war shrine in Tokyo and growing talk of revising the nation’s peace constitution have made other countries skeptical about the intention of these remarks.

He said that if Japan came out with a more forthright apology “that would make front-page headlines everywhere in the world.”

[…] Mr. Stone described Japan’s face-off with China over disputed territories in the East China Sea as like “some kid who goes out there and picks fights and then has got his big brother behind him to go clean up after him,” referring to the United States’ security obligations to Japan. [Source]