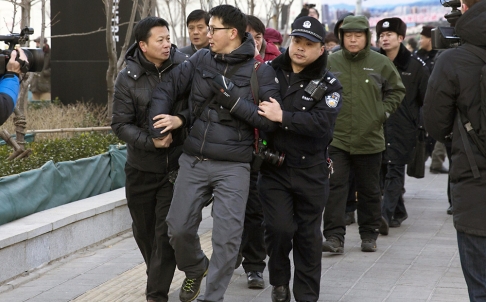 The abolition of China’s re-education through labor system last year was greeted with concern that other forms of detention would simply replace it. Reuters reported in December that existing inmates held for drug-related offenses were still doing the same forced labor in the same facilities, now rebranded as detox centers. Now, South China Morning Post’s Verna Yu reports that police appear to be abusing criminal detention as a convenient short-term alternative, even in cases with no prospect of eventual prosecution:

Statistics are impossible to obtain, due to the lack of transparency in the legal system and the difficulty in differentiating between politically motivated and non-political public order charges. But activists and petitioners also say they are experiencing more criminal detentions than before since the abolition of re-education through labour.

[…] Under mainland law, police can hold individuals for up to 30 days in criminal detention before deciding whether to pass the case to prosecutors. Prisoners can be held for another seven days while waiting for a formal arrest.

Legal experts say police have the power to arbitrarily detain perceived troublemakers in the absence of a court ruling or prosecutors’ approval, and rarely face consequences for improper detentions. Even if police do not expect a case to merit prosecution, they still use criminal detention to exert control over perceived trouble makers, lawyers say. Even when freed, former detainees are subject to restrictions including confinement to their hometowns and check-ins with local police.

[…] Some people are even detained again immediately upon their release. [Source]

Yu notes also the increased use of still other forms of detention. Two of these were involved in a recent case in which lawyers investigating a “legal education center” were themselves placed in administrative detention, and allegedly tortured.

There have been changes, too, in the charges used in political cases, with authorities shifting away from state security indictments relating to subversion and separatism. Observers are divided over whether this represents a sinister politicization of non-political crimes, or an encouraging concession to growing public rights awareness.