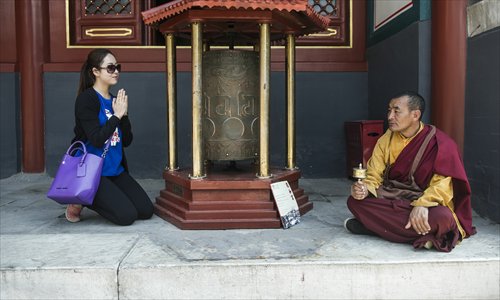 “What it means to me is serving the people,” said Yang Ling, a recent graduate. “The current value system where everyone wants to make a better life for themselves, to be successful, stops you from feeling for others,” she said.

“I do not have any desire for a fancy house or car. I have friends in Beijing and Shanghai or other big cities who went there to work and they are lost and struggling.”

[…] Meanwhile the local farmers who work the adjacent land seem bemused by the arrival of the students. “They do not grow as much as us,” laughed one.

“But it is good for students to see different walks of life.” [Source]

Also at The Telegraph, Tom Phillips reported last week on predictions that China could be home to more Christians than any other country by 2030:

“It is a wonderful thing to be a follower of Jesus Christ. It gives us great confidence,” beamed Jin Hongxin, a 40-year-old visitor who was admiring the golden cross above Liushi’s altar in the lead up to Holy Week.

“If everyone in China believed in Jesus then we would have no more need for police stations. There would be no more bad people and therefore no more crime,” she added.

[…] By 2030, China’s total Christian population, including Catholics, would exceed 247 million, placing it above Mexico, Brazil and the United States as the largest Christian congregation in the world, [Purdue University professor Fenggang Yang] predicted.

Global Times responded on Friday that Yang’s projections are “inflated.” But on Wednesday, it also highlighted an apparent trend of young Chinese embracing Tibetan Buddhism, as well as religion more generally. From Lin Meilian:

“Many young people find Tibetan Buddhism more attractive than other religions because they think it is mysterious,” Li Decheng, director of the Institute for Religious Studies under the China Tibetology Research Center, told the Global Times.

“It is also because it offers psychological comfort to these young people who find themselves lost amid China’s rapid social and economic changes,” Li continued.

[…] A poll of 4,500 Chinese aged above 16 found that 31.4 percent described themselves as religious, which suggests 300 million people nationwide could be religious, three times higher than the official figure.

The survey also found growing numbers of young people are developing an interest in religion. About two-thirds of those in the poll who considered themselves religious were aged between 16 and 39. [Source]

Some other young Chinese have sought refuge online temples or short-term religious retreats. Not all new religious converts are from the post-Maoist mainstream: some Christian missionaries have reportedly targeted Buddhist Tibetans.

At The Economist, meanwhile, Gady Epstein writes that middle-class Chinese are emigrating in growing numbers, “in search of a cleaner, slower life”:

FOR years Lin Chen resisted his wife’s entreaties to move abroad. Then, when their daughter was born in 2012, he started thinking about her schooling. He realised he wanted a less stressful education than the one he and his wife endured in their climb to the middle classes, and he wanted to leave space for fun. “My wife and I suffered a lot,” he says. “I don’t want my daughter to suffer through all that.”

And so the Lin family will soon be off to Adelaide, Australia, part of the greatest and most consequential wave of emigration in modern Chinese history: middle-class Chinese seeking not better opportunities or political freedoms but a better quality of life. Chinese emigrants are leaving good jobs, cashing out their high-priced homes (or investment properties) and leaving China’s rat race behind. They are unlikely to find better jobs anywhere else, but the air and water are less polluted where they are going, the social safety-net less frayed and the food safer to eat. And there is no one-child policy. [Source]