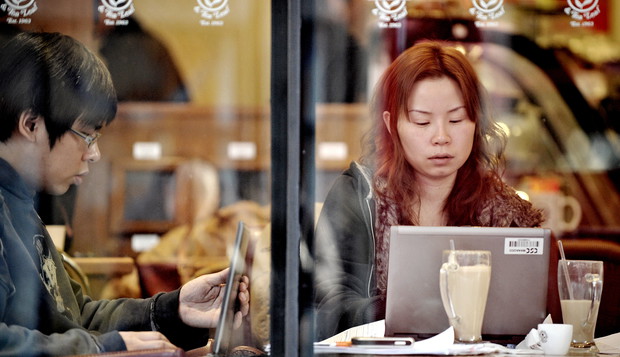 Marking the 20th anniversary this week of the Internet’s arrival in China as major Chinese tech companies like Alibaba, Tencent and Sina’s Weibo expand their global presence, Adam Minter challenges a Xinhua editorial celebrating the coexistence of censorship and commerce on the Chinese web, in defiance of predictions by “some Western prophets.” From Bloomberg View:

[…] According to this logic, the billions about to be earned by Alibaba on Wall Street are all the proof that a Chinese official should need to support continued online censorship. “This way of Internet management, itself a Chinese innovation,” Xinhua writes, without a hint of irony, “has not stifled the creativity of the Internet as some had predicted.”

This is a debatable point. In January, for example, Bloomberg News ranked Taiwan, a renegade province in the eyes of China and the home of an uncensored Internet, No. 1 in the world for patent activity; China was No. 4. To be sure, the factors that go into generating patents extend well beyond beyond Internet freedom. But overall intellectual freedom – which a free Internet encourages – obviously plays a substantial role.

Alas, from the perspective of the Chinese government, the relative success of Taiwan (or the U.S.) is beside the point. What matters is that on this celebrated anniversary, some rhetorical groundwork is laid for the extension of an online censorship policy that the government has absolutely no intention of changing. [Source]

Xinhua’s argument rebuts one made last year by World Wide Web inventor Tim Berners-Lee, who anticipated that Beijing would relax its grip out of economic self-interest. This coincided with a prediction by Google’s Eric Schmidt that Chinese-style Internet censorship will simply become technically impractical. But others have warned that China’s “neo-authoritarian” online governance is likely to endure, and even spread.

“External forces are using the social-economic contradictions and problems … to overthrow the authorities and are trying to provoke a new wave of colour revolutions,” Guo said, according to a Russian translation of his remarks.

[…] “This is a serious threat to the sovereignty and security of countries in the region and is a shared concern of the SCO member states,” Guo said.

The security alliance comprises Russia and China and the Central Asian former Soviet republics of Kazakhstan, Kyrgyzstan, Tajikistan and Uzbekistan.

Guo called on member states to come up with measures “to counteract interference in internal affairs from abroad, strengthen management of non-government organisations and control over social networks in order to discover, analyse, counter and regulate factors of uncertainty and avoid repeats of colour revolution scenarios,” according to the translation. [Source]

The Washington Post’s Brian Fung reports a similar push from both China and Russia at the NETMundial conference in Brazil:

Both countries are laying claim to a right to manage Internet affairs within their own borders. China professed its support for freedom of speech and search — but only to the extent that its own laws allowed:

This tracks closely with what China has said before about cyberspace, according to Adam Segal, a China and cybersecurity scholar at the Council on Foreign Relations. “This is official foreign policy,” Segal said in an e-mail. “The first point in the [proposed] code of conduct points to the importance of national sovereignty. In the section you quote on freedom to search, the stress for China is not ‘freedom’ but ‘relevant national laws and regulations.’” [Source]