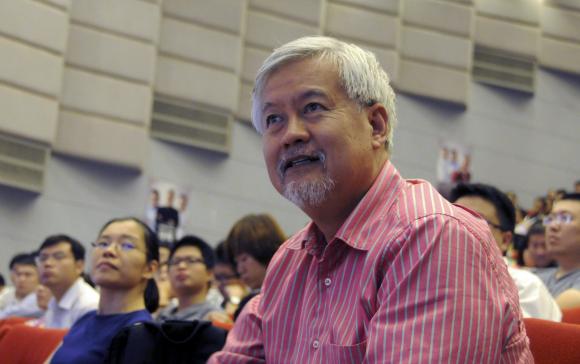 Due to a “serious illness,” outspoken blogger and Chinese-American venture capitalist Charles Xue has been released on bail after almost eight months in prison. From Reuters’ Sui-Lee Wee:

Charles Xue, also known as Xue Manzi, was detained in August on a charge of visiting prostitutes, an accusation that activists said stemmed from China’s efforts to rein in social media.

[…] Xue was released on bail because he was sick, Beijing police said on its official microblog. State television showed Xue on television on Wednesday night confessing to his crime, saying he was extremely sorry to his wife and children.

[…] In a separate case, a court jailed popular microblogger Qin Zhihui for three years on Thursday on charges of defamation and affray after he confessed to spreading rumors about the Chinese government, Xinhua state news agency said. [Source]

The New York Times’ Chris Buckley scrutinized Xue’s transformation from a man who “once embodied the raucous energies testing Internet censorship in China” to “a contrite prisoner endorsing the government’s determination to cleanse and control the Web”:

“I believe it was entirely appropriate that I was punished by the law,” he said. “I think these events were an agonizing lesson for me, and I hope that Big V’s and little V’s active on Weibo will take this as a warning that with every posting you must consider your responsibility to society.”

Mr. Xue, 61, also said that he had not considered group sex a crime because he “had lived in the United States for 34 years, and had been deeply influenced by Western values,” Xinhua, the state news agency, reported. Mr. Xue grew up in China and migrated to the United States, and he won fame in China as a canny investor in Internet and telecommunications companies.

For now at least, how much of Mr. Xue’s confession was heartfelt can only be guessed at. But the form it took was familiar. Since Mao’s time, extravagant accusations against the party’s ideological adversaries have often been followed by detention and then equally extravagant public confessions and endorsements of the official line. [Source]

More recently caught up in the rumor crackdown is an Urumqi resident detained “after he forwarded an untrue rumor that was created abroad” about the shooting of a young Uyghur by police. Critics of the campaign, meanwhile, argue that the government itself is “the biggest online rumor mill in China.”

The Washington Post’s Simon Denyer explained that the current waxing of the battle against rumors is part of a two-pronged drive, together with a similarly controversial crackdown on online pornography:

[…] Several academics and media insiders declined to comment on the campaign, except to say that strict instructions to back it had come down from the top levels of the party. “I absolutely support this campaign; I’m not supposed to add anything more than that,” said one academic, who spoke on the condition of anonymity for fear of official retribution.

But the protection of socialist values also apparently involves a clampdown on criticism by journalists and fiction writers. [Source]

Many suggest political motives for the tightening of online controls since Xi Jinping came to power. From The Financial Times’ Charles Clover:

Michael Anti, a Chinese journalist, says that under Hu Jintao, the previous Chinese president, the Communist party tolerated bloggers as long as they confined their wrath to local officials. “It was a way to control the provinces,” he said. But after Mr Xi came to power the mood changed.

“The new attitude is that if you attack any officials you attack the whole Communist party,” Mr Anti said. [Source]