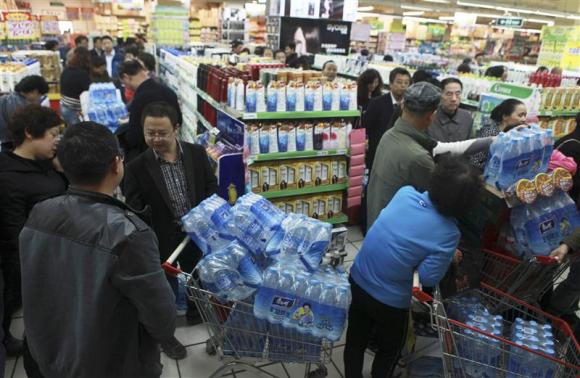 Reuters reports that people in Lanzhou have rushed to buy bottled water after authorities discovered elevated levels of benzene, a cancer-inducing chemical, in tap water:

The water supply was turned off in one district, and officials warned citizens not to drink tapwater for the next 24 hours.

“Lanzhou has shut down the contaminated water supply pipe and deployed activated carbon to absorb the benzene,” local authorities said in a statement.

“Initial investigation showed the high levels of benzene were caused by industrial contamination at one of the two culverts that transfer raw water from a sedimentation plant to the water treatment plant,” Veolia said in a statement. [Source]

A Weibo user quoted in the report adds that other liquids like beer and milk had been “snatched up” as well.   At China Dialogue, Luna Lin explains that China’s water pollution problem is “just as urgent” as the more oft-discussed problem of air pollution:

According to China Business News, China will have to reduce its annual volumes of COD and ammonia nitrogen emissions by 30-50% before there’s any significant improvement of its water.

“Tackling water pollution is as serious and worthy a challenge for the authority as combating air pollution…water pollution poses a bigger health threat to about 300 million people living in rural areas, and many of them are vulnerable and disadvantaged,” Ma Jun said. [Source]

Read more about water pollution in China via CDT.