Ambition and Amnesia in the New China 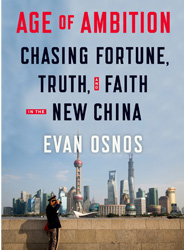 A number of new books look at the social and economic transformation of China in recent decades and how it has impacted individual lives. Leta Hong Fincher’s book Leftover Women: The Resurgence of Gender Inequality in China examines how young, urban, professional women are being pressured into marriages in which they are unequal economic partners. (See a CDT interview with Fincher about her book.)

In a joint review, Judith Shapiro looks at Fincher’s book alongside Age of Ambition: Chasing Fortune, Truth, and Faith in the New China by New Yorker correspondent Evan Osnos. About Osnos’ book, she writes:

This book focuses on the quest for wealth (“fortune”), the suppression of dissent (“truth”) and spiritual seeking in the face of moral crisis (“faith”). To illuminate these themes, Mr. Osnos is up for almost anything. He joins a Chinese tour group and experiences Europe through the eyes of his companions, noting their “fierce curiosity about the world and a defensive pride in China’s new place in it.” He travels to the gambling mecca of Macau to document money laundering and the spoils of government corruption.

His eclectic portraits are drawn from across the political spectrum: He befriends a nationalistic, neoconservative videographer who turns out to be a philosophy student in Shanghai. He travels to Shandong to try to interview the cantankerous blind lawyer Chen Guangcheng, a defender of women resisting the one-child policy, whom he finally meets after Mr. Chen escapes house arrest and finds his way to New York. He hangs out with the fabulously wealthy Gong Haiyan, who made her fortune with a dating website. (Mr. Osnos has fun deciding whether he would choose to describe himself as a “penny-pinching family man” or “a cool guy.”)

[…] Many of the people who figure prominently in “Age of Ambition” are well known in the West but little known in China. In a moment of introspection, Mr. Osnos writes that he struggled with how much to write about these dissenters. “How much did their ordeals really tell us about China?” he asks. “How much was about opportunity and how much was about repression? From far away it was difficult for outsiders to judge, but I found that up close it wasn’t much easier, because it depended on where you were looking.” The vast efforts and expenditures that the government committed to try to keep these people unknown, Mr. Osnos concludes, are in themselves compelling evidence of their importance.

In an interview with Mother Jones, Osnos explains how the subjects he chose illuminate China’s transformation:

MJ: In your book, you also talk about China’s intangible transformations.

EO: In the end, it was the non physical transformation that became the subject of this book. It was this very private, and in some ways kind of intimate, change in the way people saw themselves as citizens, as members of the society. Traditionally you saw yourself as a member of a group: the family, then the village, then the factory, and then of course the country at large.

I think a generation ago, people in China would have always talked about the collective. Today, the Chinese call it the “Me” generation, because that’s exactly what it is, people who are able and quite determined to think about their own lives in ways that are specific, idiosyncratic, and infused with personal choice. They imagine themselves to be the actor at the center of this drama. That’s a transformation. It’s meaningful in all kinds of ways—politically, economically, socially. [Source]

As Osnos makes clear, these new aspirations for personal agency often come into conflict with government controls, and this is no more evident than in efforts to commemorate the June 4th, 1989 military crackdown on protesters in Beijing. A new book by Louisa Lim, The People’s Republic of Amnesia, looks at the lingering impact of June 4th on Chinese citizens and the government’s efforts to suppress their memories. In another joint review in the New York Times, Jonathan Mirsky reads Osnos’ book alongside Lim’s:

A longtime reporter for the BBC and National Public Radio, Lim makes the essential point that “Chinese people are practiced at not dwelling on the past. One by one, episodes of political turmoil have been expunged from official history or simply forgotten” — from 1957, when ­hundreds of thousands of “Rightists,” including many intellectuals and Party members, were detained, tortured or driven to suicide; the famine of 1959-62, in which tens of millions starved to death; and the vast destruction produced by the Cultural Revolution of 1966-76. One would think these things would be hard to forget; indeed, the astrophysicist Fang Lizhi, one of China’s greatest dissidents, predicted “the failure of the ‘Technique of Forgetting History,’ which has been an important device of rule by the Chinese Communists.”

Lim disagrees. Her view is underpinned by interviews I would have thought impossible to obtain in a security state as highly developed as China’s. […]

Another scoop was interviewing an ex-soldier, now a painter, who had been in ­Tiananmen. He remembered ordinary citizens, young and old, blocking the army’s trucks on their way into the square and telling the soldiers what the demonstrations were about. (I saw this.) He recalled, too, that after the massacre citizens now exhibited “fawning treatment,” offering the soldiers food and drink. Puzzled about the change in public attitude, he concluded, “It’s a survival mechanism that people in China have evolved after living under this system for a long time.” [Source]

In a joint interview for the Los Angeles Review of Books blog, Jeffrey Wasserstrom asks questions of both Osnos and Lim and then has them each ask each other a question. From Osnos’ question to Lim:

EO: Louisa, you describe the astonishing story of a mother whose son was killed during the crackdown at Tiananmen Square. A quarter-century later, the spot where he died is now covered, 24-7, by a surveillance camera, which is, presumably, designed to record (and discourage) anyone who seeks to memorialize the death. In our years in China, we watched the rise of increasingly sophisticated and expansive surveillance technology. It’s not unique to China — American and British cities are now covered in cameras — but in China the extent is ambitious, and, most important, the goal of documenting and recording stands in contrast to the determination to forget, which you describe so well. Based on what you learned about the apparatus of amnesia, who in China decides what to remember and what to forget? How much is it based on hard-and-fast principles, and how much is it case-by-case?

LL: That’s a great question. The symbol of the surveillance camera is particularly apt because it represents the asymmetry of information in China; any footage recorded by those all-seeing cameras belongs to the organs of the state (in this case, the security apparatus) rather than the individual. And so the process of documenting and recording history remains in the hands of the Communist party. It uses its propaganda organs – its newspapers, television stations, films, textbooks and its censored internet – to dictate what can be remembered in public. But we have seen cases in recent years where public pressure, especially from the media, allowed public discussion of topics that had previously been taboo, such as the Great Famine of 1959-1962.

There are clear red lines, such as not mentioning June 4th 1989 in the official media, but these sometimes fail because of case-by-case mistakes. For example, there have been several incidents in recent years where references to June 4th 1989 appeared in state-run newspapers because young censors and editors simply failed to recognize Tiananmen-related material in order to censor it. Thus the government’s success in enforcing collective amnesia is paradoxically threatening its own control over information. [Source]

Read a Q&A with Osnos by Austin Ramzy of the New York Times as well as an op-ed by Osnos explaining why he chose not use a mainland publisher to publish a Chinese version of his book (via CDT). See also reviews of his book from the Wall Street Journal, the Los Angeles Times and the Washington Post.

Read an account in the Washington Post by Louisa Lim about the secrecy under which she had to conduct the research for and write her book, as well as more about government efforts to suppress commemorations of the anniversary of June 4th.