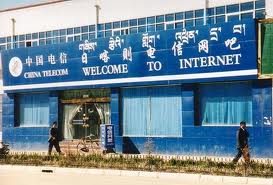 As security is tightening throughout China following a series of violent attacks—many of which labeled acts of “terrorism” and attributed to “Xinjiang separatist forces” by Beijing—the propaganda chief of the restive Tibet Autonomous Region has announced that measures will be taken to “seal and stifle” the Internet:

Dong Yunhu, Tibet’s propaganda department head, made the remarks at a meeting on Monday, the State Council’s information office said, as China seeks to stamp out ethnic unrest after a string of violent attacks it has blamed on separatists from the far-western region of Xinjiang.

“We must bring down pressure from the sky, find and confiscate materials on the ground, and seal and stifle the internet – the holy trinity of supervision and control of the system,” Dong said. “(This is) to cut off Tibetan separatist propaganda from infiltrating and destroying all manner of communication.”

Tibet has also seen heightened unrest in recent years. More than 120 Tibetans have set themselves on fire since 2009 to protest Beijing’s rule, with many calling for the return of their exiled spiritual leader, the Dalai Lama.

Beijing says the self-immolators are terrorists and has called the Dalai Lama a “wolf in sheep’s clothing” who seeks to split the country in two. […] [Source]

According to the International Campaign for Tibet’s count, 131 Tibetans have self-immolated in protest since February of 2009, the most recent case by a 32-year-old man on April 15 in Sichuan. The Dalai Lama, who has resisted taking any strong stance on the issue, recently called for an external investigation into the cause of the self-immolations. Last month, officials from Tibet’s exiled government announced the installation of a semi-permanent commemorative exhibition at the Tibet museum in Dharamshala to “ensure that international community is clear about what is self-immolation, why are Tibetans self-immolating, [and] what is leading […] Tibetans to self–immolate.”

While Beijing has long maintained tight control of the Internet, the Xi administration has done much to fortify central “Internet management” capabilities over the past year. Amid the wave of Tibetan self-immolations, authorities have in the past further tightened regulation of Internet and telecommunications in Tibet, including cutting Internet access all together for months at a time in some Tibetan regions.

Read more about tightened security following recent incidents of violence and self-immolations, the ethnically restive far-western regions of Xinjiang and Tibet, or Internet control in China, via CDT