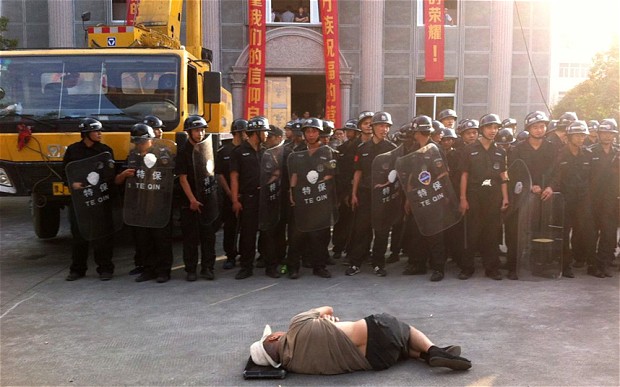 Anxieties among Chinese Christians have been stirred this year by a campaign of church demolitions and cross removals, and heightened by fears of collateral damage from a crackdown on cults. On Wednesday, Tom Phillips at The Telegraph reports, demolition workers were repelled by angry congregants from a church in “China’s Jerusalem”:

The scuffles broke out as security guards carrying black batons and riot shields tried to stop members of Wenzhou’s Guantou church from entering their place of worship to stop the cross’s removal in the early hours of Wednesday morning.

The demolition team withdrew after congregants had retaken their church, one witness told The Telegraph.

“Five or six churchgoers were slightly injured since the security people used some violence,” they added.

The failed cross removal is the latest development in a government-led demolition campaign in the eastern province of Zhejiang. Activists believe the initiative is a deliberate Communist Party attempt to rein in the explosive growth of Christianity, China’s fastest growing religion. [Source]

At the Global Times, meanwhile, Zhang Yiqian reports that rules barring orphanages from forcing religious beliefs on their charges have prompted debate:

To the religious groups, rituals are just part of normal daily life.

From the outside, it isn’t obvious Liming Family has religious affiliations. Rows of buildings stand at the end of a dirt road, and don’t look so different from the rural houses in the neighborhood.

Inside the building, a room has been set aside to act as a chapel, and a statue of Christ stands in the corner. Most of the children wear necklaces with Jesus’ medallion, pray before meals and attend mass on Sunday. [Source]