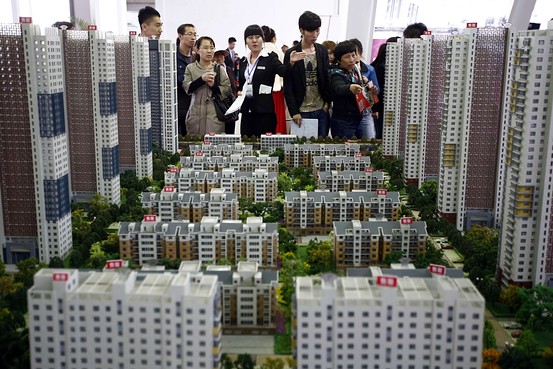 Interactive platforms carefully control background commentary on the article “A Call to Halt the Cancellation of Purchasing Limits in a Test City: Why Shenyang?” Delete content that maliciously attacks the system or counters government officials. (June 17, 2014)

Recent economic analysis of China’s property market has hinted that an investment bubble that’s been steadily inflating for nearly a decade has finally popped. Last week real estate insiders in the major economic hub of Shenyang told media outlets that the city would be easing limits on property purchases to stimulate the market. On June 11, the Wall Street Journal reported:

The northeastern Chinese city of Shenyang has scrapped some curbs on home purchases in a move to support its sluggish real-estate market, agents and consultants said.

[…] The extent of the relaxation of the curbs on multiple home purchases—a policy Beijing has used to keep speculation in check—wasn’t clear as the local government didn’t issue a statement and several government departments declined to answer questions on the policy change on Wednesday.

[…] “There is no written confirmation, but about two weeks ago some developers were informed in a meeting with local authorities that home purchase curbs would not be stringently implemented at the property transaction center,” said Wan Nan, general manager at the Shenyang branch of property consultancy China Real Estate Information Corp.

Beijing ordered tighter controls on multiple home purchases as part of a campaign begun over four years ago to keep property prices from skyrocketing and speculation from getting out of control. But China’s property market is now suffering its worst slide in years because of excess supply amid slower economic growth. Home buyers have been staying on the sidelines amid expectations that developers will cut prices. [Source]

Chinese media was likewise reporting on the rumored scrapping of purchasing regulations in Shenyang. On June 12, Guangzhou-based 21st Century Business Herald ran an article covering the possible scrapping of home purchase limits and the efforts of officials to stop the news from spreading—the article has been deleted from the paper’s website, but is available via CDT Chinese. Follow-up reporting from the Wall Street Journal notes that the official hushing of the news may be an attempt to preserve economic morale:

Shh! As the country’s property market starts to deflate, China’s cities may be relaxing their property curbs. But it doesn’t mean they want too many people to know about it.

[…] Larger Chinese cities like Shenyang are relaxing their property policies, but want to do so quietly. Officials are loath to publicize their efforts to ease curbs for fear it would seem a tacit acknowledgement that the local economy has hit the rocks.

This week, Shenyang—an economic hub and the capital of north China’s Liaoning province—grabbed the spotlight in local news and online, after property consultants and agents said that the city had revoked restrictions on multiple home purchases.

After such news broke, the city scrambled to tamp down such reports. Property agents who had freely talked about the relaxed curbs became more tight-lipped. A spokesman from Shenyang’s propaganda office told China Real Time Thursday that reports that Shenyang had completely scrapped home purchase restrictions were untrue. He said he was not authorized to say if the city has made other adjustments to local property measures. [Source]