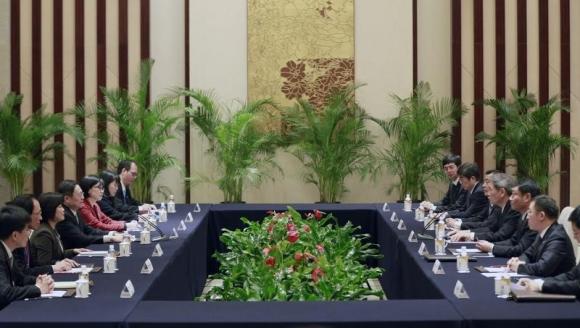 Reuters reports that China’s top official in charge of relations with Taiwan, Zhang Zhijun, will make his first visit to the island later this month:

He will spend four days in Taiwan, Xinhua said, and apart from visiting capital Taipei will also go to three other places, including Kaohsiung in the heavily pro-independence south of the island. China says it will not countenance an independent Taiwan.

China and Taiwan have been ruled separately since Nationalist forces, defeated by the Communists, fled to the island at the end of the Chinese civil war in 1949. China considers Taiwan a renegade province and has never ruled out the use of force to bring it under its control.

But in recent years the two sides have built up extensive economic ties, and in February they held their first direct government-to-government talks, in China, a big step towards expanding cross-strait dialogue beyond trade.

Yet booming trade has not brought progress on political reconciliation or reduced military readiness on either side. Many in Taiwan fear autocratic China’s designs for their free-wheeling island. [Source]

At the South China Morning Post, Laurence Chung adds that Beijing “rejected media reports that negotiations with Taipei had been suspended due to Taiwan’s lack of progress in ratifying a free-trade services pact signed last June”:

“This is incorrect,” said Fan Liqing, a spokeswoman for the mainland’s Taiwan Affairs Office, under the State Council.

Taiwan’s deputy economics minister, Woody Duh Tyzz-jiun, said on Monday the mainland had not held talks with Taiwan over a merchandise trade agreement that was supposed to be signed at the end of this year. The possibility of concluding the talks this year was “nearly non-existent”, he said.

But Fan was quoted by Xinhua as saying that executive departments and business leaders on both sides “have remained in communication and exchanged opinions regarding various ongoing or preparatory talks”.

The trade-services agreement and the merchandise pact are follow-ups to the Economic Framework Cooperation Agreement – a semi-free trade pact – signed by the two sides in 2010. [Source]