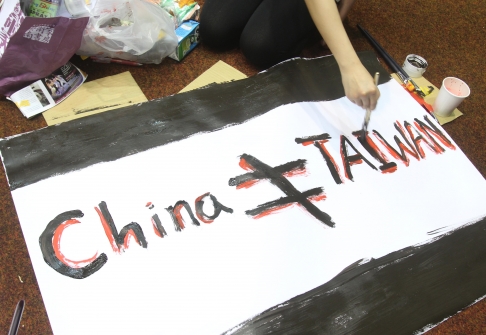 Lawrence Chung at South China Morning Post reports that Beijing has suspended negotiations with Taiwan due to the latter’s delayed ratification of a services trade pact signed by both governments last June. The trade agreement, which would liberalize Taiwan’s service sector trade with mainland China, triggered student-led demonstrations on the island and a three-week long occupation of the Taiwanese legislature earlier this year.

Woody Duh, Taiwan’s deputy economics minister, confirmed yesterday that since April the mainland had not scheduled any negotiations with Taiwan over a merchandise trade agreement that was supposed to be signed at the end of this year.

“It is not surprising for the mainland to adopt such a ‘wait-and-see’ attitude” given the delay, Duh conceded at a meeting of the legislature.

[…] Taiwan’s legislature was supposed to ratify the services trade pact within six months of its signing last June but demonstrators have objected to the agreement on the grounds that it would lead to serious job losses. They also argue closer ties with Beijing pose a threat to the island’s democracy.

[…] If the legislation is not approved, it would effectively mean the two sides would be unlikely to sign any more cross-strait agreements. Analysts said the logjam explained why the mainland had put further talks on hold, including negotiations regarding the aviation, tourism, shipping and postal service sectors. [Source]

Duh said that China has not stopped all negotiations with Taiwan. Cross-strait relations had previously appeared to be warming somewhat following the first official ministerial-level talks between China and Taiwan since 1949 in February of this year.