How China Dismantled the Uyghur Internet 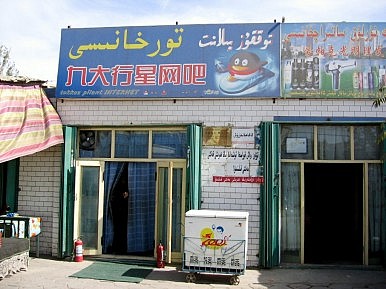 “Trapped in a Virtual Cage: Chinese State Repression of Uyghurs Online,” a recent report from the Uyghur Human Rights Project (UHRP), surveys restrictions on Uyghur-language Internet content to show how “Chinese authorities have exerted effective control over how Uyghurs seek, receive and impart information online.” Following the release of the report, UHRP’s Henryk Szadziewski and Greg Fay look at the legacy of the 10-month Internet blackout that came after large-scale unrest in Urumqi spread to other cities in Xinjiang in the summer of 2009. From The Diplomat:

The unprecedented 10-month shutdown experienced after the 2009 protests was catastrophic for original writing in the Uyghur language. When the Internet was restored in May 2010, at least 80% of Uyghur-run websites, including Diyarim, were wiped from the web in what added up to a digital book burning of Uyghur content. On the forums of Diyarim and the other two most popular sites, Xabnam and Salkin alone, over 200,000 users had contributed over 2 million posts in 145,000 threads. Not a single website that was deleted by authorities after July 5 was devoted to religion. Instead, the sites were mainly devoted to literature, entertainment, culture and computers, based on a 2009 survey.

[…I]n an environment where one Internet footprint could land them in jail, Uyghurs tended to heavily self-censor. Especially in the post-2009 period, “crackdowns” and “strike hard” campaigns became de rigueur for Chinese officials as they attempted to demonstrate control over the region. Furthermore, the research found that just as self-censorship increased, so did distrust of VPNs, even though they are commonly used in China to circumvent government blocking of websites such as Facebook and Twitter. Uyghurs knew if they in particular were found using one, it would have all kinds of negative consequences.

The story of the daily erosion of expression and association rights on the Uyghur Internet does not grab headlines. Nevertheless, Uyghurs’ inability to express concern about government policies affecting them or creating forums enabling others to freely express those opinions, more accurately describes the online environment and conditions in the region. [Source]

Amid an ongoing terror crackdown in Xinjiang, where a series of recent violent attacks have been blamed on separatists, the Internet has been identified as a conduit to “promote religious warfare” and encourage terrorism. Earlier this month, 32 were jailed for spreading “violent Internet content.”