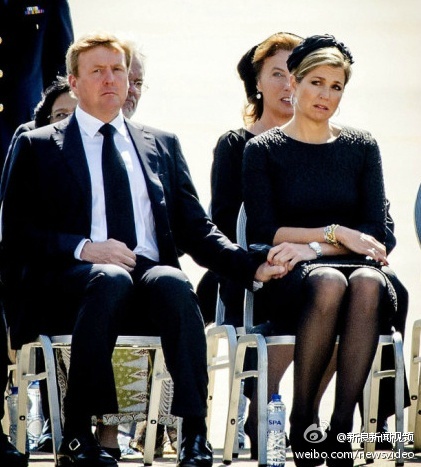 Yesterday, the remains of some of the victims the Malaysia Airlines flight shot down over eastern Ukraine arrived in the Netherlands. The plane, en route from Amsterdam to Kuala Lumpur last week, was likely downed by a surface-to-air missile fired by Russian separatists in Donetsk. One third of the passengers were Dutch citizens, and Holland is in mourning. From PRI’s The World:

Members of the Dutch royalty and politicians on Wednesday met a plane carrying the remains of 40 victims from Malaysia Airlines Flight 17 at Eindhoven airbase.

They chose not to make speeches, instead, gathering in silence. They looked on as coffin after coffin moved from a military plane to a waiting hearse, each with its own honor guard. The 40 hearses then left in a long procession, carried live on Dutch TV. [Source]

Chinese netizens were moved by the honor paid to ordinary citizens whose lives ended so tragically. Weibo Big V 假装在纽约 shared photos of the procession, stirring readers to ask if China would treat its citizens with the same respect. Many compared the Netherland’s treatment of the victims to their own government’s reaction to the Wenzhou high-speed rail crash, which happened on the same day in 2011. Soon after the train crash, photos emerged of the authorities burying the cars at the scene of the accident. Survivors were even found after the rescue had been called off. The scandal blazed on Weibo and lead to criminal punishment of the former minister of railways. But online discussion shows that many doubt China would react differently to the next disaster:

雲海一鴎: Did the Dutch king make an important speech? Did the prime minister issue a memo? Did their diplomats go to the scene to stick out their big bellies and oversee a rescue effort? Compared to our country, Holland has no humanity.

胶澳: We use forklifts, just like moving dead pigs.

胡同里的大熊猫: Look how people in other countries are given a state funeral. In China, they would immediately be cremated.

寒春Ann: This year, I still think of the families torn apart and the stories cut short by the train crash on July 23. A father, holding onto the watch he meant to give his daughter for her wedding trousseau, had no idea what had happened to her. The family couldn’t agree on compensation, and then they heard government officials whispering that “the freezers aren’t working well, there’s no way to see the body.” A photojournalist took a picture of [the father] collapsing in tears. The photo went viral on Weibo, then was immediately deleted. These are really just unrelated associations.