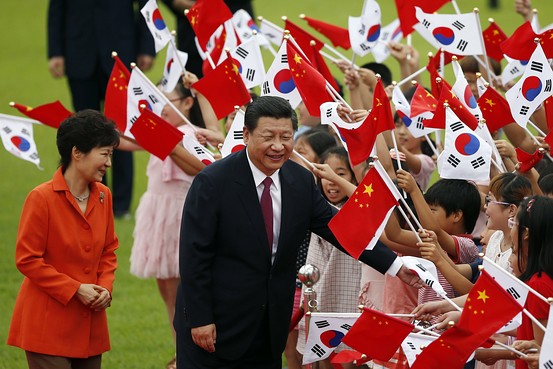 President Xi Jinping arrived in South Korea on Thursday for a state visit that is seen as reflecting a shift in regional order. Alastair Gale, Yuka Hayashi, and Brian Spegele of the Wall Street Journal report:

China and South Korea pledged to deepen ties on the same day as Japan said it would ease some sanctions against North Korea, twin moves that reinforced the shifting dynamics in a region in which both Beijing and Tokyo are seeking to assert more power.

[…] A repositioning has been under way for several years, as nations have sought to negotiate their roles amid China’s global rise. Over the past decade, Japan’s economic malaise encouraged South Korea to build up economic ties with China, now Seoul’s biggest trading partner. Under Ms. Park, South Korea has also come to see Beijing as a partner, rather than a hurdle, in dealing with North Korea.

As for Pyongyang, which has long viewed Japan as a sworn enemy, analysts say worsening ties with both Beijing and Seoul have prompted it to turn to Tokyo in its hunt for much-needed cash.

[…] The visit to Seoul by Mr. Xi comes as Beijing has grown concerned over stability in its backyard, including ongoing provocations by Pyongyang. North Korea has fired a series of short-range missiles from its coast into the sea in recent days and on Thursday vowed to continue doing so despite its now-routine breach of a United Nations’ ban on ballistic missile tests. [Source]

Xi’s visit to Seoul also strengthened commercial ties between the two Asian powers.  Youkyung Lee at AP reports that a currency agreement was signed that will expand the use of the Chinese yuan in South Korea.

Expectations were high that Xi’s summit with South Korea’s president Park Geun-hye would expand an economic and business relationship that has flourished in the past decade. Xi was accompanied by 250 business executives including luminaries such as Jack Ma, founder of the Alibaba e-commerce empire, and Robin Li, chairman of search engine Baidu. The Korea Chamber of Commerce said it was the biggest ever foreign business delegation to South Korea.

At a press conference, Park said South Korea and China will aim to complete long-running free trade talks by the end of this year. [Source]

During the visit, Xi and Park stated their firm opposition to the nuclear ambitions of North Korea. Jane Perlez at The New York Times reports:

The leaders of China and South Korea sent a strong message to North Korea on Thursday, saying they were united in their opposition to the development of nuclear weapons on the Korean Peninsula, though they fell short on how they would pursue that goal.

After a three-hour meeting, China’s president, Xi Jinping, and South Korea’s leader, Park Geun-hye, issued a joint statement that smoothed over the differences in approach that have stalled a more aggressive stance toward the unabated development of nuclear weapons by North Korea, and its leader, Kim Jong-un, China’s ally.

Their joint communiqué said that the “two countries reaffirm their firm opposition to the development of nuclear weapons on the Korean Peninsula,” phraseology that the Chinese have always preferred because it does not specifically cite North Korea.

With Mr. Xi standing beside her, Ms. Park read a statement that said the two leaders had agreed that the “denuclearization of North Korea must be achieved at all costs,” with the emphasis on the nation of North Korea rather than the Korean Peninsula. [Source]

Xi’s choice to meet with President Park over North Korean leader Kim Jong Un upends past practice of putting Pyongyang first. Scott Synder at The Guardian writes that Xi’s decision signals some distancing but not a fundamental shift in position towards North Korea.

When South Korea’s President Park Geun-hye welcomes Xi Jinping to the Blue House today, it will mark the first time that a Chinese leader will visit Seoul without having first visited Pyongyang.

This is a remarkable development when one considers the close ideological and historic ties between China and North Korea, but it would be premature to assume that Beijing has abandoned Pyongyang for Seoul.

[…] No doubt, Xi’s Seoul visit is a powerful expression of his displeasure with North Korea’s direction under Kim Jong-un, but despite Beijing’s symbolic chastening of Pyongyang and stories that China has cut its export of oil to North Korea, China still places maintenance of North Korea’s stability as a top priority.

South Korean efforts to gain China’s understanding for a South Korean-led reunification of the Korean peninsula and Park’s desire to warm up relations with Beijing may be understandable, but China may not be swayed by Seoul’s logic on Korean reunification as long as South Korea’s alliance with the United States remains central to South Korea. [Source]

In regions around its North Korean border, China is undertaking plans to expand infrastructure to facilitate trade with Pyongyang. Jeremy Page at The Wall Street Journal reports:

On a vast construction site outside this northeastern Chinese city, engineers are working around the clock on a project that could transform the economic—and geopolitical—dynamics of the region: a 223-mile, high-speed rail link to the North Korean border.

The $6.3 billion project is one of three planned high-speed railways designed to bring North Korea closer into China’s economic orbit, even as Beijing supports sanctions aimed at Pyongyang. China is also sinking millions of dollars into new highways and bridges in the area, and the first cross-border power cable.

[…] When it is finished in 2016, the railway under construction near Yanji will cut the journey between the Chinese city of Jilin and the remote border town of Hunchun to just over two hours from almost eight, according to the project’s plans. By 2020, it is expected to boost Hunchun’s population to over one million from 200,000 today thanks to an influx of migrants seeking to profit from border trade.

Work is also continuing on a rail link between the Chinese cities of Shenyang and Dandong—the busiest border crossing—and another connecting Dandong to the Chinese port of Dalian is also due to be finished this year, according to state media. A new $356 million bridge over the border at Dandong is also proceeding as planned. [Source]

Xi’s visit to South Korea is seen as China’s strategy to weaken US alliances in the Asia-Pacific and to offset Washington’s pivot towards Asia. Ben Blanchard at Reuters reports:

While Chinese leaders have not given the government’s growing list of initiatives a label or said they had an overall purpose, Chinese experts and diplomats said Beijing appeared set on shaping Asia’s security and financial architecture more to its liking.

“China is trying to work out its own counterbalance strategy,” said Sun Zhe, director of the Centre for U.S.-China Relations at Beijing’s Tsinghua University and who has advised China’s government on its foreign policy.

[…] President Barack Obama’s pivot – as the White House initially dubbed it – represented a strategy to refocus on Asia’s dynamic economies as the United States disentangled itself from costly wars in Iraq and Afghanistan.

China sees the pivot as an attempt to contain its growing influence, especially given the United States is strengthening its ties with Asian security allies such as Japan and the Philippines, which have bitter territorial disputes with Beijing in the region’s waters. Washington denies this. [Source]

When Chinese President Xi Jinping touches down in Seoul around midday Thursday, he will be landing very much in friendly territory.

Increasingly, South Koreans view the rise of their giant neighbor to the west with a favorable eye, preferring to accentuate the positive as Beijing and Seoul strengthen their political and economic ties.

According to a new survey by the Asan Institute for Policy Studies, a Seoul-based think tank, South Koreans are far more likely to view China as a cooperative partner (61%) rather than as a competitive rival (33%). For Asan, which has conducted a monthly poll of 1,000 South Koreans since January 2013, that is near a high watermark. [Source]

In a further sign of warming ties, a pair of pandas is scheduled to be sent to South Korea in the next two years. China Real Time reports:

As part of arrangements for the visit of Chinese President Xi Jinping to Seoul, China will send a pair of pandas to South Korea, although it may take up to two years for them to arrive.

“This pair of pandas, along with a sacred ibis that came last year, will be loved by Koreans as a symbol of the two countries’ friendship,” President Park Geun-hye said on Thursday after a summit meeting between the two leaders.

A government official said that because of complicated export and customs procedures, the planning for the delivery of the animals will take between one and two years. [Source]