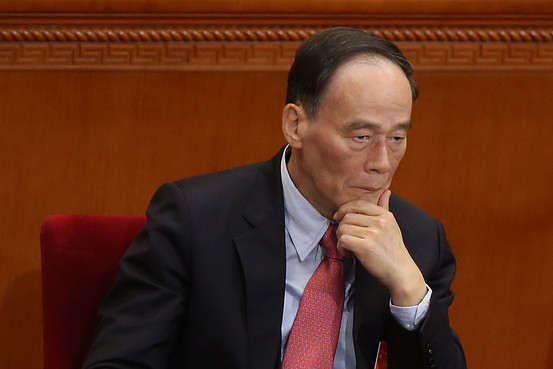 Since the corruption drive started, about three dozen officials with the rank of vice minister or higher have been detained on corruption allegations. In 2013 alone, about 182,000 party members were investigated, according to a count by Peking University law professor Jiang Ming’an, compared with roughly 10,000 to 20,000 graft investigations a year before Mr. Xi took power in 2012. So far, those efforts appear to be popular in China. Fifty-three percent of Chinese view corruption as a “very big problem,” according to a 2013 poll by the Pew Research Center in Washington, up from 39% in 2008.

[…] But the crackdown isn’t without its critics. Observers point out that it is helping Mr. Xi sideline powerful figures who could emerge as rivals or otherwise limit his authority, while burnishing his reputation with the public at large. What’s more, some human rights groups have raised concerns that those investigated are being held incommunicado, without access to lawyers or family members. Tactics used to coerce confessions have come under criticism as well: In the harshest example, six Chinese investigators—including five from Mr. Wang’s agency—were convicted of intentional infliction of harm last year when they drowned a local official during an interrogation.

[…] Mr. Wang, square-jawed with a trademark comb-over, is called “the fireman” by the Chinese media for his long career of handling emergencies. His fans have posted messages on social media sites likening him to Justice Bao, a Song Dynasty official who became a symbol of justice because of his willingness to punish powerful people guilty of crimes. They also routinely note that Mr. Wang, who is married, is childless, and thus, by local logic, has less incentive to steal to enrich his family. [Source]

In a separate post at China Real Time, Wei and Davis describe some of the anti-corruption strategies that have been employed, proposed or rejected:

Mr. Wang has said he will focus his attention on officials who keep flouting rules laid out by Communist Party Chief Xi Jinping early in the chief’s tenure—implying that he will give a pass to those who are trying to change their habits. The rules, known as the “eight-point guidelines for official conduct,” forbid public officials from doing things such as throwing extravagant banquets and using government cars for personal purpose.

Mr. Wang’s anticorruption agency is also starting to describe some offenses in plainer language than before, when authorities targeted vague notions such as “lifestyle problems,” so people know what’s barred. For instance, Mr. Wang’s agency recently started to use the term “adultery” for the first time, making clear that infidelity is an infraction of party discipline and can lead to demotions.

[… T]he party is debating whether to require officials to disclose assets publicly for the first time, a tricky issue in any society. Questions abound: Which assets should be disclosed, and to whom? What levels of privacy are public officials entitled to? [Source]

China has taken some tentative steps toward internal asset disclosure requirements, while clamping down on those who advocate the information’s release to the public. On Monday, Bloomberg’s Henry Sanderson noted that many asset disclosure pilot schemes have been abandoned:

The Beijing News found that in 2009 a county in Hunan started to reveal the assets of 69 officials, including details of the property they owned, leading locals to question how a township level official could have a nearly 1,000 square-meter property. The program was stopped after causing some “contradiction” and “disputes,” the paper said, citing an unnamed local discipline inspection official.

In Altay prefecture in northwestern Xinjiang province, the assets of 1,054 officials were disclosed in 2009. The program was stopped after an official from the regional discipline inspection committee died, the Beijing News said.

The paper said that of the 30 trial areas it studied, officials from nine didn’t answer the phone within three days, and a further nine were busy or said they weren’t clear on the situation and couldn’t do interviews. [Source]

Other mooted remedies include the development of judicial independence and rule of law, but many are skeptical of the Party’s promises in these spheres, particularly when its own disciplinary systems exist outside the law. Read more on the feared but flawed machinery of China’s anti-corruption crackdown via CDT.