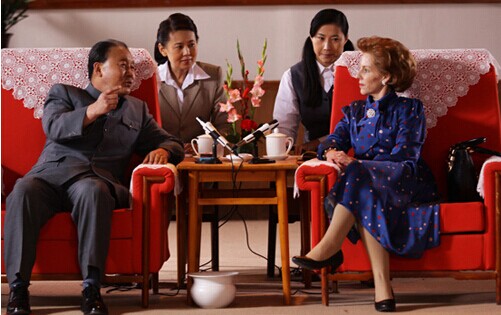 Weibo user 薛陈子 shared a notice which he claims to have found on a local government website, instructing cadres to get together to watch the new TV drama about Deng Xiaoping:

薛陈子: I saw this notice posted on the official website of some county in Yibin, Sichuan. Organizing cadres to watch Deng Xiaoping at History’s Crossroads is truly preposterous. The higher-ups make a TV drama about reform to enlighten the masses, and the peons don’t reform and blindly organize viewings. How amusing.

We hereby transmit Sichuan Propaganda Department Document [2014]10 to you. Please earnestly organize cadres to watch the TV series Deng Xiaoping at History’s Crossroads together. All levels of the media must produce related propaganda.

Tencent has reported on the province-wide notice [Chinese].

The new series treads in sensitive territory, bringing such figures to national television as Hua Guofeng, Mao’s appointed successor whom Deng pushed aside, and Hu Yaobang, the reformist whose death in 1989 lead to the Tiananmen Square protests, violently ended by Deng himself. (In 48 episodes, the series ends in 1984.)

While Deng Xiaoping avoids the most controversial (and forbidden) aspects of the late leader’s time in office, it also revises history. The show claims, for example, that punishing the Gang of Four was Mao’s plan, even though they were brought down only after his death:

“Crushing the Gang of Four was the arrangement Mao made while he was still alive.” (screenshots from Deng Xiaoping)

At Tea Leaf Nation, Rachel Lu explores criticism of the show from both Maoists and liberals. Political scientist Zhang Ming tells Reuters that the series “could have desensitizing benefits” if it portrays factional disputes within the Communist Party, but film critic Hao Jian, who was detained for a month in May after attending a seminar on June 4th in a private home, calls the show “typical propaganda.”