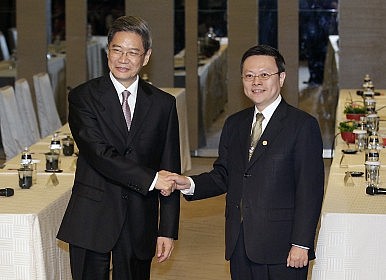 At The Diplomat, Jerome Cohen and Yu-Jie Chen describe the often sidelined human rights challenges in cross-strait relations, focusing on protection of the rights of Taiwanese travelers on the mainland.

[… W]hat was and still remains challenging for the negotiation is cross-strait disagreement over standards and expectations for assuring due process of law, including freedom from arbitrary detention and unfair legal procedures. Criminal justice is the weakest link in China’s legal system. Although Taiwan’s 1971 ouster from the United Nations has prevented it from acceding to the International Covenant on Civil and Political Rights (ICCPR), it has incorporated the ICCPR into its domestic legal system. China, on the other hand, has never ratified the ICCPR, which it signed in 1998.

[…] The current negotiation over protecting the personal security of Taiwanese in the Mainland is merely the entering wedge of a broader, now widespread concern in Taiwan that the island’s increasingly close integration with China will undermine Taiwan’s core values and the personal freedoms for which Taiwanese have long struggled. As demonstrated by the Sunflower Movement, cross-strait relations are unlikely to make further significant progress unless people in Taiwan feel assured that they will keep their autonomy, their personal security and their democratic way of life. [Source]

Such concerns are shared by many in Hong Kong, which like Taiwan has seen major protests this year revolving around relations with the mainland. At Foreign Policy, Grace Tsoi notes the emergence of links between activists in the two territories, a development which Beijing seems keen to block.

[…] During the large-scale protest in the Taiwanese capital of Taipei, one of the most commonly chanted slogans was “today’s Hong Kong, tomorrow’s Taiwan.” Some Hong Kong tourists and students also joined in, with one of them wearing paperboards that read “I am a Hong Konger. Taiwan, please step on Hong Kong’s corpse and contemplate the path you want to take.” A photo featuring the protester bearing the grave message, pictured above, went viral.

[…] While some members of the Hong Kong and Taiwan public have concluded only recently that Taiwan and Hong Kong are facing similar threats from China, activist leaders and organizers received earlier hints showing their fates were becoming intertwined. One example was a November 2012 letter written by famed sinologist Yu Ying-shih, a professor emeritus of Chinese studies at Princeton University, to Huang Kuo-chang, a law professor who later played an important role in the Sunflower Movement. Later posted on Facebook, the letter urged the Taiwanese to pay close attention to developments in Hong Kong and learn from the city’s young dissidents how to resist Beijing’s encroachment. “The driving force behind the two movements was the Chinese Communist Party … and only then did I realize that we are facing similar problems,” Chen, the Sunflower Movement leader, told Foreign Policy. [Source]

See more on Taiwan and Hong Kong and their relations with Beijing, via CDT.