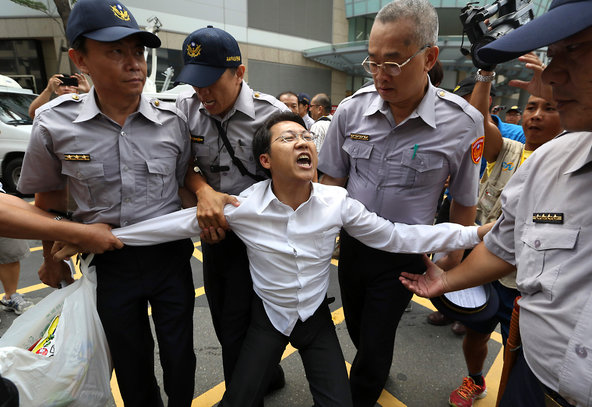 South China Morning Post’s Lawrence Chung reports on an ongoing four-day visit to Taiwan by China’s Taiwan affairs chief. The trip follows Beijing’s rebuttal of reports that it had frozen cooperation talks over disruption of a cross-strait trade pact by student protests this spring.

“As head of the Taiwan Affairs Office, this is very important to me, especially when most of my colleagues have visited Taiwan before,” Zhang Zhijun said during his first trip to the island.

[…] The island’s President, Ma Ying-jeou, told Forbes magazine in an interview published yesterday that, in order to understand the island better, authorities on the mainland “need to do more homework”.

Zhang and New Taipei mayor Chu exchanged views about the future of cross-strait relations during their meeting.

“I told director Zhang that in developing cross-strait relations, aside from having the necessary ambition, it is also important to be able to respect others’ opinions, understand why and how others feel that way,” Chu said. [Source]

On Friday morning, Mr. Zhang, who heads China’s Taiwan Affairs Office, met with Chen Chu, the mayor of the southern city of Kaohsiung. A founding member of the opposition Democratic Progressive Party, she was jailed in the 1980s for opposing martial law. At a news conference after their hourlong meeting, Ms. Chen made reference to the struggle to end authoritarian rule in Taiwan.

“Taiwan’s democracy didn’t fall from the heavens,” she said. “Rather it was something the people of Taiwan fought for.”

[…] Mr. Zhang has also been trying to build closer relations with local leaders, including Ms. Chen of the independence-leaning D.P.P., which has not organized any large protests against his visit. President Ma Ying-jeou, who was not scheduled to meet with Mr. Zhang, has seen his popularity plummet over the past year. While the next presidential election is still two years away, some political analysts say Mr. Ma’s woes could pose difficulties for any Kuomintang candidate and increase the possibility of an opposition victory. The Chinese government thus wants to forge ties with opposition figures like Ms. Chen, who visited China last year. [Source]

Global Times’ Bai Tiantian suggested that the DPP, in turn, is maneuvering into a more conciliatory position:

Zhang will not meet DPP Chairperson Tsai Ing-wen despite an earlier statement from Tsai indicating her warm welcome and her intention to meet, a drastic change of attitude considering Tsai’s leading role in a rather violent protest against a 2008 visit from Chen Yunlin, then chairman of the mainland’s Association for Relations Across the Taiwan Straits.

[…] Other analysts say Tsai’s move is an effort to change the DPP’s image as a party that goes against everything the Chinese mainland proposes.

“It is still unknown whether the change is for real or a strategy to cope with the coming election season,” said Zhu Weidong, another scholar from CASS. “Judging from the current situation, it is very likely that Tsai will run for ‘Taiwan president’ as candidate from the DPP. We are still observing whether Tsai really intends to push to transform her party.” [Source]

Meanwhile, some bridge-building between Taiwan’s Sunflower Movement and Hong Kong’s Occupy Central was thwarted this week, as two Sunflower activists were denied entry to the city amid growing tensions over its political future. From Ramzy and Alan Wong at The New York Times:

Lin Fei-fan, Chen Wei-ting and Huang Kuo-chang had planned to attend a forum next Monday by the New School for Democracy, a group that promotes political reform in China. They also had wanted to attend a protest march next Tuesday. ”We suspect that this is deliberate political suppression by the Chinese Communist Party and the Hong Kong government, ” they said in a Facebook posting.

[…] Joseph Cheng, a political science professor at City University of Hong Kong and a New School for Democracy organizer, said the group has sought to develop ties with activists in Taiwan as a way of increasing pressure on the Chinese government. China considers self-ruled Taiwan to be part of its territory, and in recent years Beijing has pushed for increased trade and cultural relations with Taiwan.

At Thinking Taiwan, J. Michael Cole detailed other recent signs of “Beijing’s meddling in the immigration decisions of the territory’s administration.” He concluded:

Ironically, Beijing’s White Paper and repressive measures have only succeeded in bringing Taiwanese and Hong Kong societies closer together by making it evident that democratic forces on both sides must unite against the authoritarian forces that are pitted against them. As Beijing and its allies in the territory turn the screw on civil society, Taiwan’s democratic alliance should perhaps test the Ma administration by inviting Hong Kong activists to participate in seminars in Taiwan. After all, Ma is all for democracy in China, is he not? [Source]