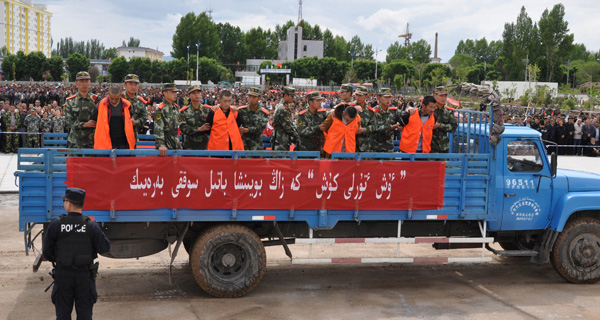 Part of doing justice in the criminal process is protecting the dignity of people in custody, presuming their innocence, and providing them with the conditions necessary for fair trial. China’s decisions to prohibit public executions, in 1979, and ban “perp walks” for sex workers, in 2010, seemed to acknowledge at least some of these principles, but ongoing public arrests and sentencing and televised confessions indicate that dignity and fairness are not afforded equally to all Chinese citizens.

[…] Both forms of public shaming, televised confessions and public arrests and sentencing likely share the same goals: frightening criminals, educating people, and maintaining social stability. Absent from this list of aims is justice, procedural or substantive. Public law enforcement marginalizes lawyers and courtrooms and with them go dignity, presumptions of innocence, and the likelihood of a fair trial. With an emphasis on legal reform in the upcoming plenary session of the 18th CPC Central Committee in October, perhaps one area worth revisiting is the tendency for humiliation to masquerade as justice. [Source]