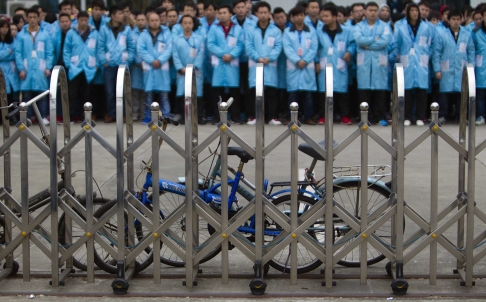 According to the Hong Kong-based China Labour Bulletin, the number of strikes and worker protests in the second quarter of 2014 increased 49% from the same period last year, and 180% from 2012. South China Morning Post’s Patrick Boehler talked to CLB’s Geoffrey Crothall about developments including the social media-fueled surge in labor protests, the greater expectations of today’s workers, and the case of protest leader Wu Guijun.

Workers are increasingly asking the question “Where is the trade union?”. For a long time the official All-China Federation of Trade Unions was seen by workers as a waste of space, not even worth bothering with. But now workers not only have higher expectations of their pay and working conditions but also of the role of the trade union as well. We have seen many cases of workers either demanding the establishment of a democratically elected and democratically run trade union in their workplace or making appeals in person and via social media to the local trade union federations to get involved and help them in their dispute with management. […]

What can we expect from Guangdong’s promise to allow democratic trade union elections?

I am not too sure we can expect too much from the union itself, simply because it really lacks the experience and the ability to organise real trade union elections. The workers on the other hand have already shown that in many cases they are willing and able to organise democratic elections among themselves when selecting representatives to negotiate with management.

CLB founder and director Han Dongfang also discussed the goal of strengthening China’s unions this week in an interview with The Nation (via CDT). Meanwhile, CLB reports bleak prognoses for surviving victims of this month’s deadly Kunshan factory explosion.