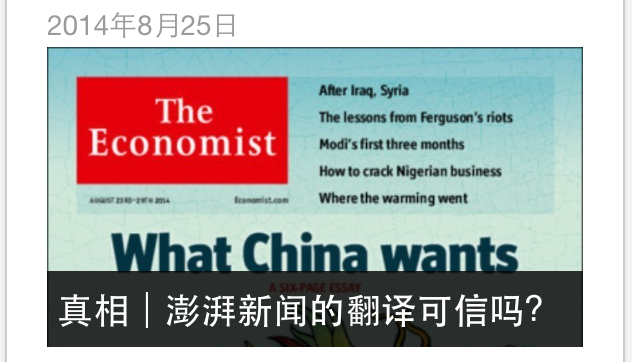 Newly launched political news website ThePaper.cn (澎湃), part of Xi Jinping’s drive to up the presence of state-sanctioned news in the new media environment, received a warning from central authorities last month for not sticking to the “bottom line.” After this early official warning, Tea Leaf Nation reports that the news outlet has attracted netizen criticism for selectively translating a recent Economist article on Beijing’s political ambitions:

[…] A subset of Shanghai’s state-run Oriental Morning Post with outside investment estimated at $32 million, the Paper seems to be a venture into state-funded public service journalism. The timing is appropriate, coming as the influence of staid party mouthpieces has diminished while new media has flourished among China’s increasingly internet-savvy populace. With several bold investigative reports in the past month alone, the Paper could be primed to break new ground, with the state-run Global Times hailing it as a “trail blazer.” But if a recent translation snafu is any indication, the Times may have overstated the new outlet’s promise.

On August 25, the Paper posted a Chinese translation of London-based magazine the Economist’s August 23 cover article, “What China Wants.” The Economist feature proffered several recommendations for how the United States can accommodate China’s economic and military rise without forfeiting U.S. interests in Asia. But the abridged Chinese translation left out several key passages. An August 25 post on the popular mobile chat platform WeChat by a public account called Mayflower Report demonstrates how translators neatly excised negative conclusions and ominous predictions about trouble China may be creating for itself in the future.

[…] The Mayflower post wasn’t an outlier; after the original complaint, a number of other alternative publishing platforms chimed in. […] [Source]

Over the past year, the Xi administration has been tightening controls over traditional and new media. Around the time ThePaper.cn was preparing its official launch, the popular independent news translation outlet Cenci Journalism Project was forced offline.