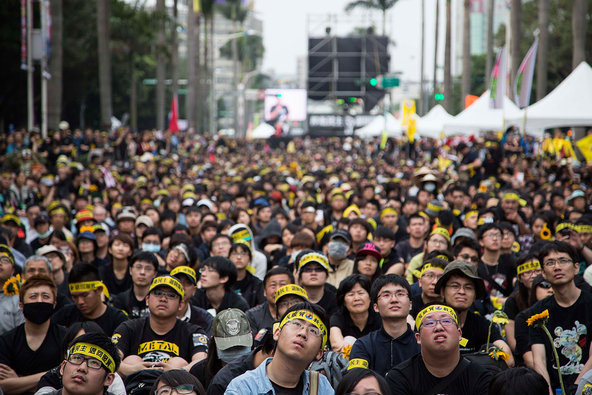 As tensions between supporters of democracy in Hong Kong and the Beijing government heat up, many in Taiwan are keeping careful watch. Taiwan’s President Ma Ying-jeou, who has worked to develop closer cross-Straits ties, has stated publicly that he supports universal suffrage in Hong Kong, where he was born. Austin Ramzy at the New York Times reports:

Self-ruled Taiwan, regarded by China as a part of its territory with which it must eventually be united, is often characterized by deeply fractious politics, with the leading camps split between those who lean toward unification and those who favor independence. But the similar responses to this issue on both sides suggest that China’s Hong Kong policies have undermined its overtures toward Taiwan.

Taiwan’s president, Ma Ying-jeou, who was born in Hong Kong, expressed concern for the city’s democratic aspirations during a meeting of the Kuomintang, Taiwan’s governing party, which he also heads.

“Democracy and rule of law are core values of the people of Hong Kong and also goals that have been pursued for a long time,” a Kuomintang statement paraphrased Mr. Ma as saying. “People of Taiwan from all walks of life have a high degree of concern and support for Hong Kong people’s continuing fight for universal suffrage.”

Mr. Ma has pushed for closer ties with China, and since he came to office in 2008, trade between the two sides has nearly doubled, reaching $197 billion last year. But such growing links have triggered concern in Taiwan about the extent to which the Chinese Communist Party is using them to extend political control. [Source]

For Bloomberg, Noah Feldman explains why Taiwan’s unique status poses a risk and how Beijing may have intended to send a message to Taipei with its recent actions in Hong Kong:

China’s official policy toward Taiwan proposes the reincorporation of the island into the sovereignty of mainland China. When China formally explains what should happen to a Taiwan unified with the mainland, the model it provides is “one country, two systems” — the model it adopted in Hong Kong following its assumption of sovereignty from the British Empire in 1997.

This isn’t mere rhetoric. Although Taiwan is an independent, functioning, capitalist democracy, its Chinese character is an article of faith for Chinese Communist Party leadership and also for many ordinary Chinese. The nationalism of this claim to ownership makes Taiwan an especially important symbolic issue for the party, which must increasingly rely on nationalism to assert its governing legitimacy as economic growth inevitably slows.

[…] The message to Taiwanese democrats is clear: China will not experiment with electoral freedom in the context of its unique satellites. China knows its behavior in Hong Kong will be watched in Taiwan, and must therefore have judged that any costs associated with the perception of its approach were outweighed by the benefits of limiting democracy. [Source]

Taiwan has also seen protests this year over relations with the mainland, and activists in both Hong Kong and Taiwan have begun to join forces, much to Beijing’s chagrin.