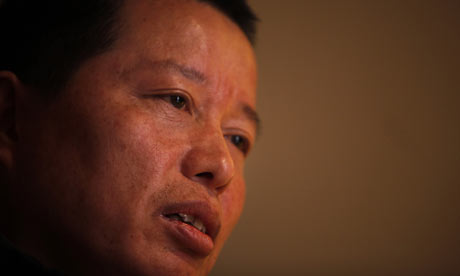 On Sunday, a Washington Post editorial highlighted the mistreatment of recently released rights lawyer Gao Zhisheng, as well as Wang Bingzhang, Liu Xiaobo, and his wife Liu Xia, and urged the Obama administration to publicly press China for better treatment of political dissenters.

Is this the product of a rising, confident China — the “China Dream” that President Xi Jinping likes to present to the world? Mr. Gao committed no crime and never questioned Communist Party rule. He was something more dangerous: a lawyer who sought to uphold the law and the constitution that the Communist Party claims to live by. At one time a successful establishment attorney, he began to work pro bono for people he thought were getting a raw deal: practitioners in the Falun Gong spiritual community; peasants pushed off their land by developers with connections. Likely it was his very moderation that Mr. Xi and his cronies found so threatening. Mr. Gao was part of a movement that sought to reform China gradually, peacefully, through the rule of law. Its existence challenged the party’s claim to be the only alternative to chaos. Given the party’s diminishing legitimacy, due to corruption, pollution and other ills, Mr. Gao posed too much of a risk.

[…] The Obama administration says it raises individual human rights abuses in meetings with Chinese officials but keeps the conversations private. Over the past five years, this deference has proved fruitless. It is time for a new approach. Mr. Gao should be allowed to receive medical treatment and join his family in the United States. President Obama should find his voice and make clear that Mr. Gao’s fate is important to the United States. [Source]

Susan Rice completes a three-day visit to Beijing Tuesday, with the aim to strengthen cooperation amid bilateral tension and crises in the Middle East and Europe. A sign that the U.S. National Security Adviser has made progress would be Beijing’s decision to allow human-rights lawyer Gao Zhisheng to leave China for medical treatment in the United States.

[…] While Ms. Rice has plenty on her agenda, from the summit to maritime territorial disputes and cyber espionage, issues of political freedom and human rights deserve a prominent place. One is Hong Kong’s fading freedoms. Another is Gao Zhisheng, a brave advocate whom Beijing has abused long enough. [Source]

If anything, though, U.S. policy may be moving in the opposite direction as China’s resistance to foreign pressure on rights hardens. From a New York Times report on Rice’s visit last week:

[A senior administration official] said Ms. Rice had raised human-rights cases, but declined to say if she had asked her hosts to let Gao Zhisheng, a dissident lawyer released from prison last month, join his wife in San Francisco. Discussing the cases publicly would be “counterproductive,” the official said.

The reticence was unusual, said Kenneth Roth, executive director of Human Rights Watch. “It’s quite extraordinary not even to mention the names of imprisoned dissidents whose names have been quietly raised,” he said. “It’s difficult to comment on whether there is something about these particular discussions that require such unusual discretion, but I’m skeptical.” [Source]