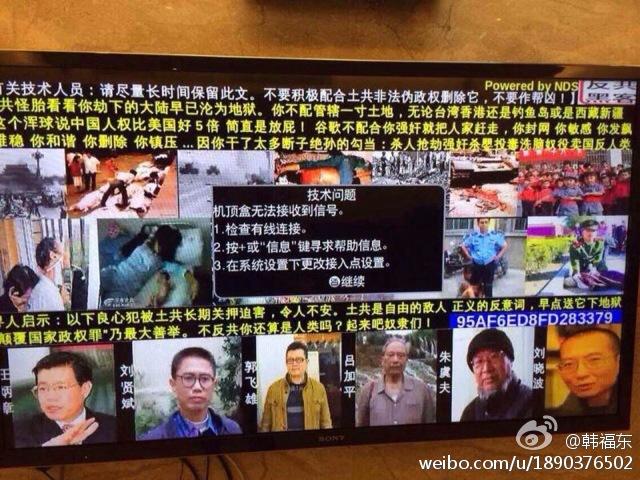 As of August 1, the following search terms were blocked on Sina Weibo (not including the “search for user” function).

One message, emblazoned across the top of the screen, declared, “Damn the Chinese Communist Party’s mouthpieces: China Central Television, Peoples’ Daily” — the first a broadcaster, the latter a newspaper, and both generally acknowledged to toe the party line — as well as “the Propaganda Department and the State Radio and Film Administration,” both agencies that exercise government censorship. Another message, placed in the lower left-hand corner of the screen, called for the release of Wang Bingzhang, a pro-democracy activist who has been detained in China since 2003, and declared that “the Communist bandits are the real criminals.” Yet another message read, “Friends, do not cooperate with Communist devils.”

[…] The group whose logo appears on the hacked TV screen calls itself the Anti-Communist Party Hackers; on Twitter, they have claimed to have successfully attacked many other Communist Party websites. In an email response after the attack, the group denied responsibility, claiming instead that it was the work of “friendly forces” in the fight against the Communist Party. [Source] Liu Xiaobo (bottom right) and other dissidents made a surprise appearance on Wenzhou TV tonight. (韩福东/Weibo)

Confused viewers took to Weibo, but their comments have been deleted en masse. Deleted posts are available on FreeWeibo. The censors’ reaction answers questions from December 2012, when netizens wondered whether CCTV’s airing of the banned film V for Vendetta signaled greater media freedoms to come.