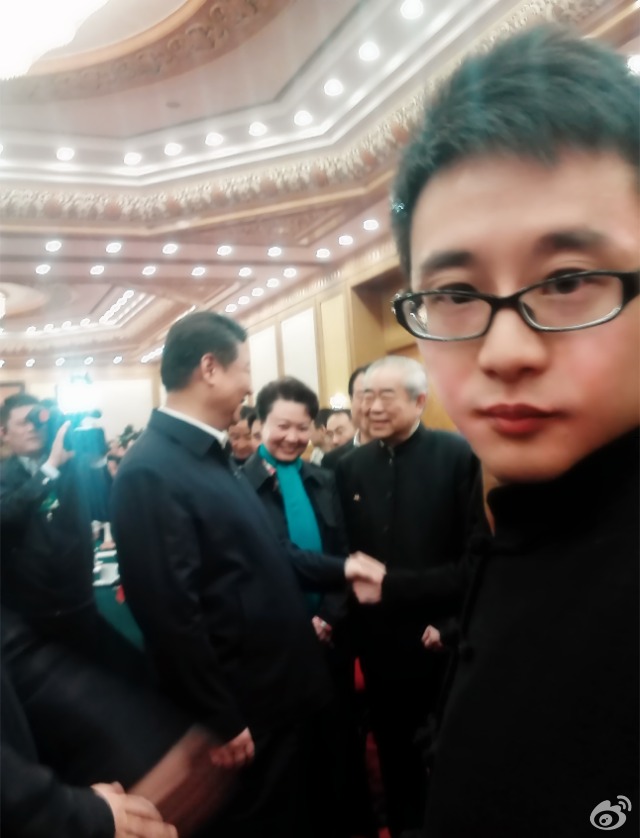 Since nationalistic blogger Zhou Xiaoping’s “positive energy” won accolades from Xi Jinping at the Beijing Forum on Literature and Art last week, he has been the subject of much netizen scrutiny, and some have taken him to task for his blatant misrepresentation of facts. CDT has translated one netizen’s annotation [Chinese] of an excerpt from an essay that Zhou posted to his Sina blog in 2013 [Chinese].

Zhou’s blog post is titled “His and Their National Dream,” where “he” is Mao Zedong and “they” are his companion founders of the People’s Republic of China (PRC). Zhou counters internal criticism of China’s status quo by explaining the glorious military history that reinforces his love for the Chinese Communist Party (CCP) and the nation.

The netizen’s annotations, which stand out from the original text in bold, draw attention to Zhou Xiaoping’s tendency to blatantly disregard historical accuracy.

His and Their National Dream

…When the Chinese government had just established itself from the ruins; (Better to be clear that you are talking about the government of the PRC. There has always been a “Chinese government.” The Republican government and the Qing government were both “Chinese governments.”) when the Chinese people managed to gain a new lease on life from the fires of war; when we erased the lives of some tens of millions of men and sons on the battlefield, when we managed to chase off the Eight-Nation Alliance; when we had managed to establish our own nation; (Chase off the Eight-Nation Alliance? Was it you, Zhou Xiaoping, who chased them off? During the Boxers‘ 1900 siege of Beijing, the Eight Nation Alliance entered the capital and Empress Dowager Cixi fled west in a panic. The Qing government ended up signing the Boxer Protocol with the Eight Nation Alliance, paid reparations, and made concessions.) the Americans didn’t leave us even a trace of breathing room. In 1950 the previous wave of former invaders had just left, and the Seventeen-Nation Allied Army [i.e. the United Nations Command] invaded us again under the leadership of the United States. (This is nonsense. On June 25, 1950, Kim Il Sung attacked South Korea unannounced, and the United Nations Security Council passed Resolution 82 which condemned North Korea’s actions and authorized forces to block the North Korean army. Even if they were invading, they were invading North Korea, so how could it be that “Japan had just left, and America invaded us again,” huh? Aren’t you just talking a bunch of nonsense here?)

After making landfall in Korea, the Seventeen-Nation Allied Armies swept into Pyongyang, continuing to make a rapid advance toward the Yalu River, their goal being to move in the direction of the industrial base China had just established in the northeast. (Please read a history of the Korean War, okay? Because China and the Soviet Union had just signed the Sino-Soviet Treaty of Friendship, Alliance and Mutual Assistance, which stipulated that signatory nations were obligated to provide assistance in military affairs. This meant that to invade China was to take on the Soviet Union as an enemy. In order to prevent the Soviet Union from joining in, even though there was a minor amount of cross-border military activity, from the beginning to the end the American government demanded that [General] MacArthur exercise restraint, and not allow the fires of war to reach China’s northeast. For a time they declared the entire border region with China’s northeast a no-fly zone. For this reason, MacArthur had a serious falling out with President Truman, which in the end led to MacArthur being discharged. Zhou Xiaoping ignores historical fact when he claims that the United Nations attacked China—if he’s not ignorant, then he must be malevolently misleading his readers.)

If these industrial bases had been pounded into rubble, then China would never have had nuclear bombs, guided missiles, tanks, submarines, fertilizer, or mechanized factories, and they also never would have had created trains and boats. (Oh, come on, even in the Qing dynasty, the Jiangnan dockyards could already produce warships. By 1920, they had already exported large ships to the United States; the Mawei Shipyard had already built our nation’s first airplane in 1919, in the seventh year of Emperor Guangxu [1881] China made its first train, and in 1931 China produced its first automobile.) Then the people of China would forever have suffered the torments of hunger and warfare like today’s Somalia and Afghanistan. (Don’t use the word “forever”in every sentence, you’re just being alarmist. Will history from here on out be decided by you and you alone, Zhou Xiaoping?)

At that time the Seventeen-Nation Allied Armies had cutting-edge military armaments with ferocious firepower: their guns, tanks, airplanes, and artillery were a hundred time more ferocious than those of the troops who had previously invaded from Japan. At that time, China’s People’s Liberation Army basically had nothing. Since they had just established the nation, all they had were some locally manufactured hand grenades and an odd assortment of firearms. (More nonsense. During the time period in which the Soviet Union occupied the northeast, they passed on the weapons and equipment they confiscated from the Japanese to the CCP’s military, including artillery, tanks, airplanes, and other heavy weapons. Besides, by 1947 the CCP had begun to use the numerous factories left behind in Dalian after Japan’s surrender to build a military firm on an enormous scale–the “New Construction Company,” established to make a heroic contribution to the effort to seize political power.)

And it was under these conditions that he [Mao Zedong] and they [Mao’s comrades] did not abandon their own dream for their nation. With great difficulty, the people of China managed to establish a homeland and to protect it from destruction; they managed to get a piece of land to eke out a living, and they managed to prevent the raping and pillaging of their wives and children, the young and old. (Such a rich and terrible tableau must have come from Zhou Xiaoping’s sexual fantasies.) At this time, on the battlefields of North Korea, the most elite troops of the People’s Republic of China put everything on the line, and Chinese people bet their house on them. The soldiers who took part in the war with the American-led Seventeen-Nation Allied Armies were all veteran troops. On average these seasoned soldiers had participated in 100-400 military campaigns big and small. (Little Zhou, did you count them up? What is your source? To speak without thinking, “a river of words flowing from your mouth,” this is your precious style.)

On the plain of steel they hugged explosives and crawled under enemy tanks to detonate their payload. In Changjinghu they were turned into living ice sculptures by temperatures as low as minus 30 degrees Celsius. At the coast they plunged into the sea to follow American surplus troops already fleeing on speedboats, carrying mortars on their shoulders to continue firing on the enemy. They did all this to let loose their cries, eager to force these foreigners who were more vicious and wolf-like than wolves to withdraw forever from their own homeland… (Who is more vicious and wolf-like than wolves? The Kim family dynasty or the Americans? Compare the lives of the North Koreans and the South Koreans and you’ll know the answer. Their own homeland? Could it be that in Comrade Zhou Xiaoping’s heart of hearts, North Korea is really his ancestral land?)

Having endured these campaigns, the best men and boys in the Chinese people’s modern history nearly all died. Mao Zedong and many, many of the common people’s sons alike all died on the battlefield, becoming immortal spirits to protect our current peace and prosperity. (That a bitter sacrifice like this was traded for the world’s most authoritarian, despotic and shameless political power–their deaths weren’t worth it, and they died unjustly! Their deaths did not protect our peace and prosperity, but instead the throne of the Kim dynasty, three generations of fatties who indulged in a life of luxury and extravagance, and the boundless tragedy of the people of North Korea!)

The CCP isn’t my “second set of parents,” but the great benefactor of my parents and former generations. Several of my grandfather’s brothers died in the chaos of war, and it was the CCP which ended all the wars. When my parents were young they endured starvation, and in the end it was the CCP which launched a project to repair the railroads which end all famines. Therefore, my love for China and my love the CCP is a very natural thing. If you’re not an ungrateful wretch, how could you not love the CCP? [Chinese]