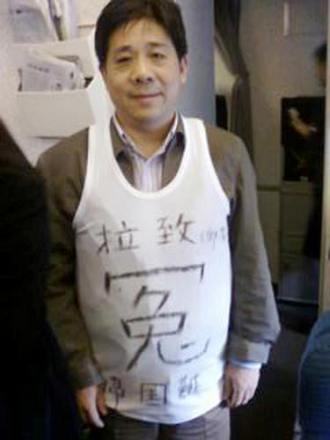 After being denied re-entry to China eight times, Feng Zhenghu lived in Tokyo’s Narita Airport for 92 days in 2009-2010. Now Feng is telling the story of his airport odyssey on his blog, and CDT is translating his account. This is the second installment. Read Part 1 here. On November 4, at about 9:45 a.m., more than ten Shanghai police officers forcibly brought me to the docking area of All Nippon Airlines (ANA) Flight NH0922. Their aim was to once again illegally “deport” me, a citizen of China, back to a foreign country. I strongly resisted. They tried to force me onto the aircraft. I struggled, clinging to the boarding gate and screaming for help: “This is kidnapping! You are criminals!” I wrestled with these kidnappers for over an hour. In the end, the Shanghai manager of ANA, surnamed Iida, succumbed to the kidnappers’ threats and assisted them in this abduction. Four strong young SWAT officers picked me up and dragged me into a seat in the back of the aircraft. A tall, big-boned employee of the Shanghai branch of ANA, Mr. Wang, used his whole body to press me into the seat. At this point I was already exhausted, and had no energy left to resist their illegal actions. A flight attendant hurriedly closed the cabin door, and the aircraft made its way to the flight lane and quickly took off. Some of the passengers witnessed me being dragged onto the plane. Because of the ordeal, the flight was delayed 56 minutes; originally scheduled to depart at 10:15, it was delayed until 11:20.

As soon as the cabin door closed, I calmed down. Mr. Wang let go of me. He even apologized, “It isn’t right to do this, but I don’t have a choice. I’m on salary—all I can do is follow orders. Please forgive me.” I told him, “I don’t blame you. I will go up the line of command to the person responsible. ANA isn’t putting the safety of passengers first, forcibly abducting a Chinese citizen onto your plane. But I do care for the safety of the passengers. Don’t worry, I won’t cause you any problems during the flight.” On the plane, I didn’t so much as utter a word of resistance. I just took out a white tank top, wrote “injustice” on the front, and put it on. I sat in my seat, closed my eyes, and tried to relax. As the plane pulled into the airport in Japan, I asked one of the other passengers to take a cellphone picture of me wearing my “injustice” shirt.

The plane arrived at Narita Airport. As I was exiting the aircraft, the crew chief presented me with a written warning. I didn’t accept it, instead telling her, “You’re giving this to the wrong person. You should have given this to those police officers illegally detaining me on this plane. They are the ones who used violence to detain a Chinese national and caused the flight to be delayed.” I understood very clearly that the Japanese people I spoke to were a bunch of bullies—business people with no sense of right and wrong. Speaking with her was useless. I simply smiled at her and left.

Acting outside the law, Shanghai officials used ANA employees, Japanese aircraft, and violence to abduct and deport a Chinese citizen to Japan. This is extraordinarily absurd and a shame for the Chinese people. So I decided not to go through immigration into Japan. I stayed outside the Japanese customs gate to protest this violation of human rights by the Shanghai authorities and to call for the Chinese government to carry out its responsibility to protect its citizens and let me return to my country and my home. In addition, I repeatedly expressed to ANA that if they agreed to let me continue taking ANA flights, I would immediately enter Japan.

After hearing about this, [my younger sister] Meijiao raced to the airport and called the Japanese police. The police said they did not deal with matters outside of Japan’s borders, and that this was under the jurisdiction of the Immigration Administration. The chief examiner of the First Airport Immigration Examiner’s Office came to speak with me, and I explained why I wasn’t entering the country. For my own human dignity, and to protect the dignity of China and Japan, I refused to give in to this abduction. I would not enter Japan, and I demanded to return to my country.

That night, I did not eat. I slept in the immigration lobby, fully clothed, with a chair for my bed. [Chinese]