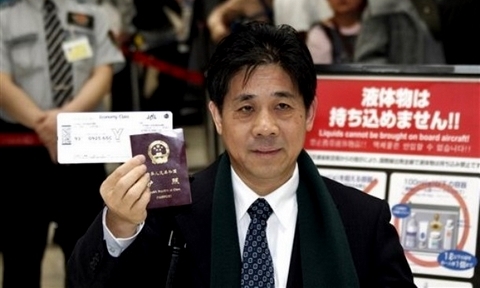 Feng Zhenghu is a businessman, a teacher, and a signatory to Charter 08. But he is best known as China’s “Terminal Man.” In November 2009, after the Shanghai authorities had refused him entry into China for the eighth time, Feng began a three-month live-in protest at Tokyo’s Narita Airport. After several days living on nothing but tap water, he survived on food donated by Chinese and foreign friends passing through immigration. With the help of the Chinese Consulate in Japan, Feng Zhenghu finally went home on February 12, 2010. Read news coverage and firsthand accounts of Feng’s stay at the airport via CDT.

Five years later, Feng is telling the story of his airport odyssey in installments on his blog. CDT is translating his account. The following is the first installment in Feng’s story.

On the afternoon of November 3, 2009, my little sister and Mr. Ning came to see me off on my eighth attempt to break through the barriers and return to China. We took the subway from Shinkawa, Chiba Prefecture, to Narita Airport. We arrived at the airport around 5:00 p.m. for All Nippon Airlines (ANA) Flight 0921 at 6:40 p.m. When I went to check in for my flight, the automatic check-in wouldn’t work, so I went to the ANA desk to be manually checked in.

An ANA employee told me, “Shanghai has notified us that they can can’t let you return home. They say that if you go back, you will have to pay tonight’s hotel charges, and that it will be for two rooms.” My sister translated my response: “This matter is between me and the Shanghai authorities. Let them tell me themselves when I arrive in Shanghai. It has nothing to do with your airline. Does you agree to let me board my flight?” The ANA employee said, “We agree, your paperwork is all in order.” She completed my check-in, and I passed through customs without a hitch and boarded flight NH0921.

I was certain that the Shanghai authorities weren’t stupid enough to blackmail a person who’s been kidnapped into paying the room charges for their illegal detention. They usually pay an out-of-court settlement to the victim. If they had said this, it was only to scare ANA. Probably they wouldn’t admit that they had said it, and would instead say that ANA had made it up. I knew that at that time ANA wouldn’t dare use Shanghai officials refusing my repatriation as a reason to not let me board the plane, because there were already two foreign airlines operating in Japan in the middle of court cases for this kind of illegal behavior. ANA, on the other hand, is a Japanese corporation, and therefore wouldn’t dare to openly violate Japanese law on Japanese soil.

Around 9:10 that evening, the plane landed and pulled up to the terminal. As soon as the cabin doors opened, I was taken away by a big group of police officers, who had been waiting a long time for me. They formed an entourage around me, taking pictures and recording video, and escorted me to a VIP lounge. They frisked me and inspected my baggage to make sure that I wasn’t carrying any contraband. Then a border inspection officer told me, “Mr. Feng, once again you cannot enter the country and return home. This is the decision of the higher leadership.” I asked him, “Who are these higher leaders? How is it possible that such a heavy punishment could be leveled on the basis of a verbal accusation.?How come you can’t show me one official document? What you are doing is illegal.” He had no way to reply, merely forcing a smile.

Then four SWAT team officers forced me downstairs and into a police car. With one police car in front clearing the way and another guarding the rear, we processed to a hotel inside Pudong Airport. I spent that evening in the same room with the four SWAT officers. They never left my side, watching over me closely. Plainclothes police officers stayed on guard in room next door. [Chinese]