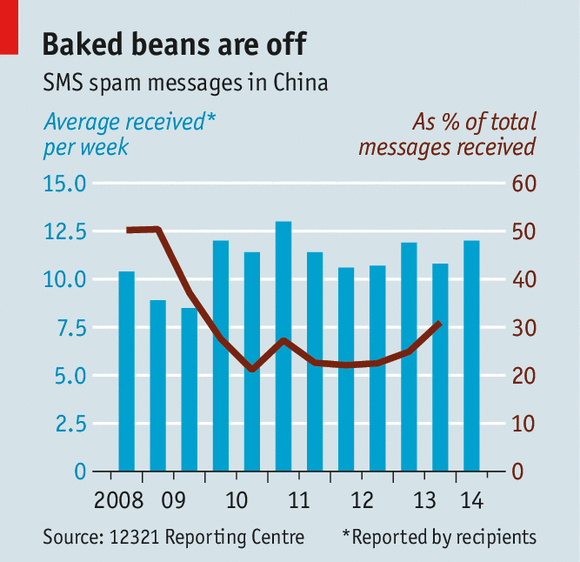 Despite Chinese authorities’ deep experience in restricting electronic content, The Economist reports that they continue to struggle in their long-running battle against SMS spam, which currently accounts for around 30% of all messages received. One major obstacle is mobile carriers’ reluctance to close loopholes from which they are believed to earn hundreds of millions of dollars a year.

Chinese mobile-users get more spam text messages than their counterparts almost anywhere else in the world. They received more than 300 billion of them in 2013, or close to one a day for each person using a mobile phone. Users in bigger markets like Beijing and Shanghai receive two a day, or more than 700 annually, accounting for perhaps one-fifth to one-third of all texts. Americans, by comparison, received an estimated 4.5 billion junk messages in 2011, or fewer than 20 per mobile-user for the year—out of a total of more than two trillion text messages sent.

China’s spam problem has persisted for years, despite repeated declarations by the authorities that they will crack down. Why have their efforts failed? The elusive spam vans are part of the problem: they are difficult to track and profitable to operate. One car can send 200,000 messages a day for a daily fee of about 10,000 yuan ($1,600). This is about the cost of the device used to intercept numbers, which can be assembled at home. The equipment falsifies the numbers from which the messages appear to arrive. Chinese users can report spam texts, just as they can in many other countries. But spammers who are occasionally caught still reckon their trouble was worth it. Fines are paltry. The authorities recently proposed raising them to 30,000 yuan—peanuts to a spam-car crew. [Source]

Harsher penalties have sometimes been applied: in March, authorities announced the detention of 1,530 suspected mobile spammers. Searches for “fake base station” (in Chinese) were a blocked on Sina Weibo in June, when three of those detained stood trial.