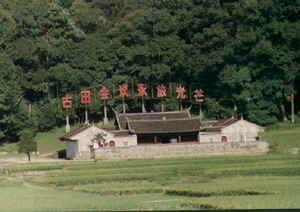 Last week, the Chinese Communist Party underscored its view that “rule of law” is a tool at its disposal. Speaking at the former revolutionary base of Gutian in Fujian, Xi Jinping then underlined the similar status of the People’s Liberation Army, the army not of China but of the CCP. From AFP:

Anyone calling for China’s People’s Liberation Army to be loyal to the state rather than the Communist party has a “very black heart”, military media said Monday, after President Xi Jinping stressed: “The party commands the gun”.

[…] “We must face up to the outstanding issues which face us in building up the military, especially on our political thinking,” the official Xinhua news agency quoted him saying at a two-day meeting in a former revolutionary base in the southern province of Fujian. [Source]

An editorial at Global Times blamed calls for the PLA’s nationalization on the West, an increasingly battered scapegoat:

The principle of the Party leading the military is known to all Chinese. Some people claim that since the military belongs to the country, such a principle has no legal basis. These people have obviously been influenced by the West and they are echoed by people from within China.

If the West wants to create disturbances in China, nothing is more effective than weakening the CPC’s leadership. The West has penetrated into many agendas, such as questioning the source of the legality of CPC’s rule. Nationalization of the military is also one of these topics. It directly advocates depriving the Party’s leadership of the military and shaking the foundation of the Party’s power.

[…] The principle of the Party leading the military has been tested for over 80 years. It is this principle that has helped the CPC-led military to survive severe revolutionary conditions and temporary military frustrations. It is both conceited and naïve to overthrow it with a few ideals from the West. [Source]

“In today’s China, without the leadership of the CPC, the military could easily fall into an uncontrolled state,” Wang Zhanyang, a professor with the Central Institute of Socialism, told the Global Times.

“The absolute leadership of the Party prevents the military coups that frequently occur in some Latin American and Asian countries,” Wang further noted.

[…] “Unlike Western countries, China has only one ruling party. Thus the country faces different conditions regarding the relationship between the Party and the military,” Xu [Yaotong of the Chinese Academy of Governance] told the Global Times.

[…] “Despite the fact that the military plays a key role in China’s politics, there has never been any political turbulence caused by military intervention. This has something to do with CPC’s effective leadership over the army,” Zheng [Yongnian of the National University of Singapore] wrote. [Source]

See also coverage of the recent 25th anniversary of the June 4th crackdown, via CDT.