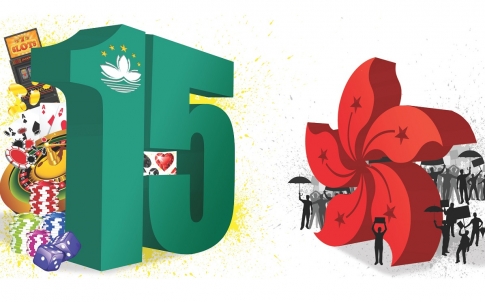 With the dust starting to settle from the seven weeks of street protests in Hong Kong, the government led by Chief Executive C.Y. Leung appears to have emerged relatively unscathed. For Bloomberg, Shai Oster argues that the peaceful end to the protests only strengthened Leung’s standing with Beijing, with whom he has had a long and close relationship:

The protest’s end leaves Beijing with undiminished control over the former British colony and reinforces Leung’s long-standing ties to the country’s Communist Party. The result could increase the chances China will nominate the chief executive to run again in the next election or find a way to reward him in another role.

“The central government is satisfied with the performance of Leung,” said Chen Guanghan, deputy director of the Chinese Association of Hong Kong and Macau Studies, a semi-official body staffed with retired Chinese policymakers. “He has shown that he can keep the same line with the party on urgent issues.”

Even critics acknowledge his success in this round. Joseph Cheng Yu-shek, a political science professor at the City University of Hong Kong and a pro-democracy activist who was arrested when he joined protesters, said Leung’s performance means he will keep playing an important role.

Beijing could opt to back another candidate for chief executive to gain more public support. Still, Leung is likely to land another key role in the public or private sector, Cheng said. [Source]

But many participants of the protests departed with signs reading “We will be back,” and the newly invigorated political consciousness among Hong Kong’s youth may pose a challenge to Leung as he finishes his tenure. The Economist writes about the lingering frustration and anger among students as they return to classes:

The target of much of this frustration is Hong Kong’s deeply unpopular leader, “C.Y.” Leung Chun-ying. He may have won credibility with leaders in Beijing for his handling of the unrest, but he will be dogged by protests for the remaining two-and-a-half years of his term. There is a growing risk that as frustrations grow, the oft-praised pragmatism of the Hong Kong public will give way to outbursts of violence. Mr Leung’s troubles, it is safe to say, are far from over.

Mr Leung has the power to do something about this. Demand for greater democracy in Hong Kong is fuelled by profound dislike of an economic and social system that is a relic of colonial days and remains under the sway of a business elite whose members dominate Hong Kong’s main organs of power. Despite the territory’s well-deserved reputation as a low-tax, low-regulation place, the government restricts the supply of land and splits the gains from high land prices between itself and the elite. Hobbled by some of the steepest property costs in the world, ordinary Hong Kongers would benefit from a larger supply of housing. If the government broadened the tax base, the territory would be better able to cope with the pressures of poverty and an ageing population.

When it comes to political reform, Mr Leung’s hands are tied by Mr Xi’s intransigence. But he has done little to make the obvious case to leaders in Beijing that stacking political institutions with tycoons and their cronies—as the British once did and as China still prefers to do—will fuel discontent. The Occupy demonstrators wanted not just a one-person, one-vote electoral system, but also a sweeping change in the way that Hong Kong has been ruled for more than 170 years. Mr Leung must tell his masters in Beijing that such change is badly needed, and that without it, anger could well erupt into the chaos some had feared during the Occupy movement. [Source]

As protesters figure out how to evolve their actions into a new phase, the battle for Hong Kong’s media may move to the forefront, as the divide between Beijing-backed and pro-democracy media has only grown more stark since the protests concluded. Heather Timmons and Gwynn Guilford write for Quartz:

As pro-Beijing factions ramp up self-censorship and pressure journalists to toe the party line, Hong Kong’s next big democracy fight is likely to be over the freedom of the press.

Even before the protests started, the Chinese government lectured Hong Kong’s media on the need to increase coverage of anti-Occupy Central protests (often led by apparently pro-government toadies), while pressuring advertisers who supported pro-democratic publications.As the protests got underway, more than 20 journalists were physically assaulted by anti-Occupy protesters and police.

Free speech isn’t the only consideration—Hong Kong’s media market is also potentially lucrative. Advertising spending in Hong Kong increased 9% in 2013, to $5.56 billion, and about one-third of that went to newspapers and television. [Source]

Meanwhile, next door in Macau, the population is also showing signs of a growing political consciousness, changing the narrative of the island being the obedient younger sibling to its rebellious Hong Kong elder. Niall Fraser and Raquel Carvalho at the South China Morning Post report that Beijing’s representative in the territory, Li Gang, told an audience that anyone who doesn’t like the Basic Law in Macau will be, “despised like a rat on the street”:

Li, the director of the liaison office, is Beijing’s top representative in Macau. He delivered the rodent-laced rhetoric as he praised the city for its adherence to its mini-constitution – a similar if not identical document to that of Hong Kong.

But the overwhelming view in Macau is that Li was talking directly to Hong Kong.

As it struggles to mend deep divisions exposed and amplified by the Occupy Central movement, Li was likening Hong Kong to the wayward older sibling who could learn a thing or two from its more compliant and respectful junior.

However, taken alongside pointed comments 24 hours earlier by Basic Law Committee chairman Li Fei on the need for Macau to diversify its casino-reliant economy or risk damaging “the interests of the whole nation”, and the wider context of Beijing’s plans to tackle the flow of dirty money from the mainland to Macau, the sheen starts to come off the “good kid, bad kid” simile. [Source]

The Macau government is responding by cracking down on any activity linking Macau to the Hong Kong protests. During a visit to the territory by President Xi Jinping, no one in his official entourage carried an umbrella, the symbol of the democracy movement, despite the light rain upon his arrival. From AFP:

Authorities were on guard on Friday for signs of dissent, with reporters at the airport waiting for Xi not allowed to hold umbrellas, and handed raincoats instead.

[…] A handful of protesters holding umbrellas were stopped by police in the afternoon when they attempted to walk to where Xi was staying.

“Why does such a powerful authority have to be afraid of a simple symbol of the yellow umbrella?” pro-democracy activist Jason Chao said.

[…] Several Hong Kong activists including veteran lawmaker Leung Kwok-hung were reportedly turned back at Macau’s ferry terminal as they held up yellow umbrellas and a large yellow banner which read “I want real universal suffrage, have you received the message, Xi Jinping?” [Source]