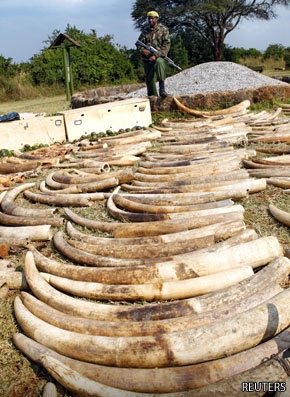 At TIME, Maya Rhodan looks at a new report from nonprofit Save the Elephants on China’s escalating demand for illegal ivory despite efforts to enforce ivory trade laws:

Researchers from Save the Elephants and the Aspinall Foundation found that “every metric on the ivory trade has exploded upwards in recent years,” from the price of raw ivory to the number of factories and retail outlets. “All have shot up,” the report says.

The authors say China “holds the key to the future of elephants.” China has become the major source of illegal ivory smuggled in from Africa, even as it holds on to a stockpile of ivory that can be sold legally. The Chinese government has begun cracking down on illegal smugglers in recent years, but they’re currently losing the battle against dark trade. [Source]

As Chinese demand soars, so do street prices for illegal ivory. The report says that the wholesale price of raw tusks has tripled in the past four years, while retail prices for ivory have increased 13 fold since 2002.

While Chinese demand for ivory ornamentation has been noted to fuel illegal poaching in Africa, so has a demand for rhino horn, a staple of the traditional Chinese pharmacopeia. At the Council for Foreign Relations’ Asia Unbound blog, Africa studies researcher Allen Grane outlines China’s role in fueling poaching in Africa, noting recent policy and educational efforts the Chinese government is taking to combat trade in African wildlife products:

[…] In January 2014, the government destroyed six tons of confiscated ivory. In August, the Chinese embassy in Kenya donated $20,000 to wildlife conservancies. Some of this change may be due to public education by Chinese stars such as Yao Ming and Jackie Chan. In addition, Beijing may be concerned about the role of poaching and the trade of ivory and rhino horn in supporting regional conflicts in Africa. A New Scientist report claims a direct link between the illicit wildlife trade and militant groups throughout Africa, and China has extensive investments in areas that these groups operate in. For example, China is investing over $6.5 billion into mineral infrastructure in the Democratic Republic of the Congo, where ivory helps fund numerous rebel factions. […] [Source]

Despite recent government efforts, Chinese officials and businessmen—including some in Xi Jinping’s entourage on a recent trip to Tanzania—have been accused of smuggling ivory.