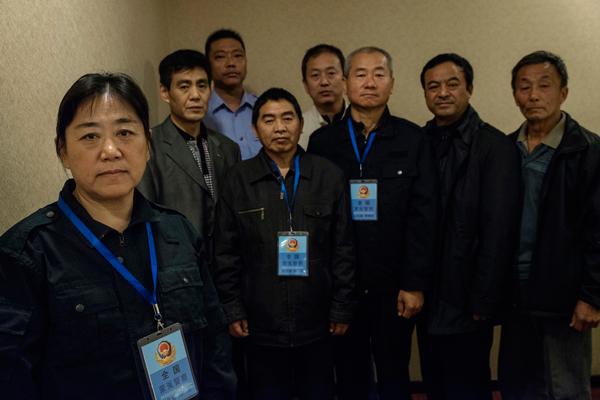 On Monday, The Washington Post’s William Wan profiled a number of former police officers, court officials and others who had turned to petitioning after losing their positions. Among these was Liu Ming, “a towering former station chief who was purged after offending superiors.”

China’s legal system is so broken that a separate government agency — called the petition system — has been set up just to handle the millions like Tian who flock to its cities each year, alleging abuse and begging for intervention.

[…] Their natural enemies are the police officers sent from back home to prevent them from embarrassing local leaders in front of Beijing’s central government with stories of abuse and corruption.

That used to be the job of Liu, the former station chief who lives in Tian’s village. He and those under his command wielded words at first, then force if necessary, to drag petitioners back to Anhui province.

The stubbornness of petitioners always perplexed him, he said. After living as one of them, however, he said he finally understands their actions even in the face of arrests and beatings.

Liu has been captured and sent home by authorities seven times this year while petitioning. [Source]

In a follow-up post on Wednesday, Wan focused on the subsequent arrests of Liu and another interviewee, this time for talking to the Post:

[Despite] painstaking, seemingly paranoid precautions on their part and ours – just days after our interviews, Liu and another former officer we met, named Zhuo Cong, were arrested in retaliation for our secret interviews.

[…] On the night after Liu returned from Beijing to Huainan, five officers from the Huainan Police burst into his home and pressed him to the floor, according to Liu’s supporters. Days later, Liu was formally arrested under criminal suspicion of “stirring up trouble.”

According to one friend who helped find Liu’s current lawyer, police also accused Liu of “leaking state secrets” because of his interview with us – a charge that human rights experts say is frequently and flagrantly used in China to silence dissenting voices. [Source]

Veteran journalist Gao Yu was tried in Beijing last month on the same charge, which carries a maximum sentence of life imprisonment. A series of warning signals to domestic news media this year included guidance to journalists on handling state secrets and involvement with foreign media organizations.

Beijing has repeatedly promised to protect the rights of petitioners. Its current round of legal reforms includes efforts to channel their grievances back into the courts.