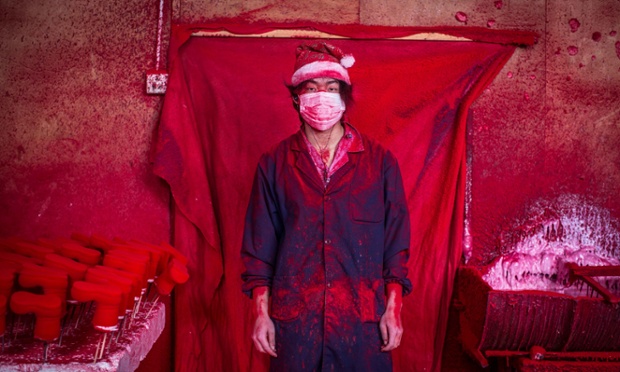 With Christmas nearly upon us, The Guardian’s Oliver Wainright takes us to Yiwu, Zhejiang, the manufacturing and commodity marketing hub that produces an estimated 60% of the world’s yuletide trinkets:

Christened “China’s Christmas village”, Yiwu is home to 600 factories that collectively churn out over 60% of all the world’s Christmas decorations and accessories, from glowing fibre-optic trees to felt Santa hats. The “elves” that staff these factories are mainly migrant labourers, working 12 hours a day for a maximum of £200 to £300 a month – and it turns out they’re not entirely sure what Christmas is.

“Maybe it’s like [Chinese] New Year for foreigners,” says 19-year-old Wei, a worker who came to Yiwu from rural Guizhou province this year, speaking to Chinese news agency Sina. Together with his father, he works long days in the red-splattered lair, taking polystyrene snowflakes, dipping them in a bath of glue, then putting them in a powder-coating machine until they turn red – and making 5,000 of the things every day.

In the process, the two of them end up dusted from head to toe in fine crimson powder. His dad wears a Santa hat (not for the festive spirit, he says, but to stop his hair from turning red) and they both get through at least 10 face masks a day, trying not to breathe in the dust. It’s a tiring job and they probably won’t do it again next year: once they’ve earned enough money for Wei to get married, they plan on returning home to Guizhou and hopefully never seeing a vat of red powder again. […] [Source]

A video project from Unknown Fields (via Quartz) documents the human efforts that go into producing the world’s Christmas kitsch, shows a stroll through the Christmas section of the Yiwu commodity market, and finally boards a boat with all the Yiwu-produced holiday export:

A report from The Economist looks at China’s adoption of the Christian holiday so associated with consumption:

In the first decades of Communist rule in China Christianity was banned, along with other religions. Now there are tens of millions of Christians in China and faiths of all kinds are blossoming. But this has little to do with the country’s fast-growing fascination with Christmas. In the West the holiday is a commercialised legacy of Christian culture; in China it is almost entirely a product of Mammon. Father Christmas is better known to most than Jesus.

Well before Christmas took hold in China’s cities, its factories were churning out Christmas essentials for consumption in the West. Industrially, China is now the Christmas king. According to Xinhua, a state-run news agency, more than 60% of Christmas trinkets worldwide last year came from a single “Christmas village”—Yiwu (in fact, a city), in the eastern province of Zhejiang.

But ever more of these goodies now stay in China, to satisfy a domestic craving. Some are tailored to Chinese tastes: Father Christmases playing the saxophone, for example, are a common decoration—no-one quite knows why. […] [Source]

While nobody knows for sure, theories on the origin of China’s ubiquitous saxophone Santa do exist.

As many of us are decking halls with plastic boughs of holly and donning Santa apparel from the factories of Yiwu, Chinese authorities may again choose to put a high-profile human rights activist on trial. Quartz’ Lily Kuo reports on that likelihood, summarizing past Chinese utilization of global holiday distraction:

In the past, civil rights lawyers Ni Yulan, who campaigned against forced evictions, was tried four days after Christmas in 2011 and eventually sentenced to two-and-a-half years in prison. (Ni and her husband, also an activist, have recently been released but say they’ve been physically attacked by police.) That year, two writers were alsosentenced to jail on Dec. 23 and Dec. 26. In 2007, AIDS activist and environmentalist Hu Jia was arrested on Dec. 27, and the year before that, human rights lawyer Gao Zhisheng was sentenced to three years in prison three days before Christmas. Most famously, writer and Nobel Peace prize laureate Liu Xiaobo was sentenced on Christmas Day to 11 years in prison for subversion in 2009.

This Christmas could bring the trials of human rights lawyers like Tang Jingling and Pu Zhiqiang, who were detained in the spring for participating in commemorations of the June 4th crackdown on democracy activists in 1989. According to Eve, their cases have moved closer to trial over the past few weeks, which means they could go to court in late December. [Source]