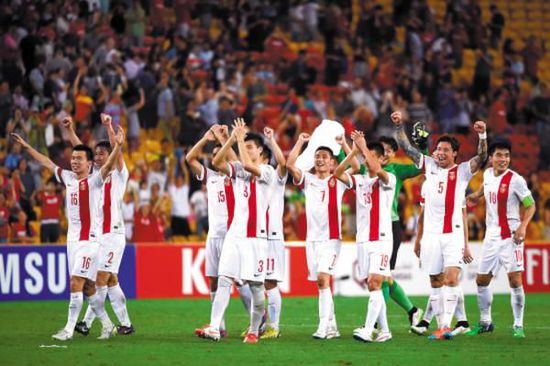 China’s national soccer team loses a lot. They have qualified just once for the World Cup, in 2002, where South Korea defeated them in the first round. The team made it to the finals of the Asian Cup in 2004, only for Japan to beat them 3-1. A devastating 5-1 loss to Thailand in 2013 inspired soul-searching cartoons.

Hope springs once again at this year’s Asian Cup, now going on in Australia. China is still in the game, and will advance to the quarterfinals after beating North Korea on Sunday. What can explain this unusual success, and how can it continue?

WeChat user Liangjianwudi (亮剑无敌) has an idea, and it involves the threat of corruption charges from President Xi Jinping—who has made China’s success in soccer an important goal—and a flight home on Malaysia Airlines. Question marks in between characters in the subject line of the post break up the sensitive words “Daddy Xi” and “General Administration of Sport,” a precaution to keep the post from alerting censors:

Before the Asian Cup, Dad?dy? Xi went to talk to the head of the Gen?eral Admin?istra?tion of Sport, Liu? Peng…

Before the Asian Cup, Daddy Xi went to talk to the head of the General Administration of Sport, Liu Peng, and said:

Then Liu Peng went to talk to China’s National Football Team coaches and players, and said, “If you play well, you’ll take a Qantas flight back. If you play poorly, you’ll take Malaysian Airlines…”

After they won, an angry mob surrounded the national team bus. The team captain, Zheng Zhi, almost broke down in tears. “We were cursed when we didn’t win. Well, today we won, and everyone’s yelling at us anyway!”

Read more about soccer in China from CDT.