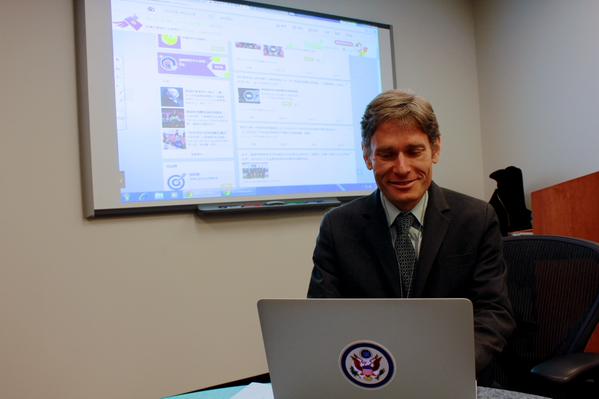 A U.S. embassy Weibo chat on human rights was moved to Twitter after the Weibo account set up for the dialogue disappeared. Visitors to the embassy website were invited to submit questions to Tom Malinowski, Assistant Secretary of the Bureau of Democracy, Human Rights, and Labor, about the U.S.’s record in fulfilling United Nations human rights treaties. Malinowski planned to respond live on Weibo on February 13. But before the day came, his Weibo account had gone:

Tried to do it on #Weibo but looks like Internet police got there 1st. Info can be slowed, not stopped. Look forward to more of these (2of2)

Questions ranged from campaign financing issues and human rights abuses in the U.S., to the universality of human rights, as well as appeals for the U.S. to monitor the imprisonment and abuse of human rights advocates in Chinese such as Gao Zhisheng, Pu Zhiqiang, and Ilham Tohti. Questions submitted by email or Weibo were anonymous, but human rights activists outside of China also submitted questions.

Q: After the revelations of the NSA wiretaps and the CIA torturing detainees, hasn’t the U.S. lost its ability to set an example of how to uphold of human rights?

We are not perfect, and we welcome constructive criticism. But the test for any country is how it fixes problems. For example, President Obama has reviewed and reformed U.S. surveillance to make sure our government cannot spy on anyone for the purpose of suppressing criticism or dissent.

U.S. courts must authorize any investigation of the contents of a U.S. citizen’s communications. On torture, we have taken steps to ensure that we never resort to the use of abusive interrogation techniques. We are committed to transparency and our government fully revealed problems that occurred in the CIA’s former interrogation program in a report that was publicly released by our Congress.

Our laws and policies now clearly require our military and intelligence agencies to use only non- coercive interrogation methods listed in this U.S. Army Field Manual: http://tinyurl.com/ns8q93l. Participating in the UPR and human rights treaty processes is one way we gather input on how to improve further.

China has recently cracked down on human rights lawyers. For instance, Pu Zhiqiang is still in prison, and only because of a few comments on Weibo. What do you think of this?

Q: Please pay attention to the current state of human rights in China. Many lawyers and writers are being thrown into jail, such as Pu Zhiqiang and Tang Jingling.

A: We follow the human rights situation in China closely. We frequently ask about individual cases, including defense attorneys Pu Zhiqiang and Tang Jinglin.

I’m happy to have the chance to ask you a question. How do you think China can advance freedom of speech while staying on the path of socialism with Chinese characteristics? #Malinowskiyearenddialogue

We regularly call on all governments to respect the universally recognized right of their citizens to express themselves freely, including online. We hope that Chinese leaders will come to realize that excessive constraints on freedom of speech and the Internet will limit their country’s prosperity as well as its freedom, since prosperity today depends on building a modern information-based society.

Thanks to everyone, including the fifty cent party, for the great questions. Look forward to continuing the conversation. Please suggest other topics you’d like us to address the next time we do one of these chats.

Read selections from the dialogue at CDT Chinese.

Even after the designated Sina Weibo account was closed down, information about the dialogue spread on Tencent Weibo, another popular microblogging platform. A search finds more than 350 posts announcing the dialogue on Tencent and spreading the address to submit questions: 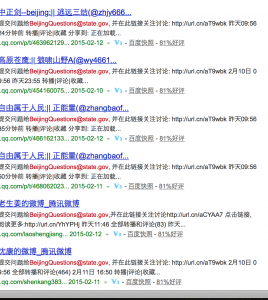 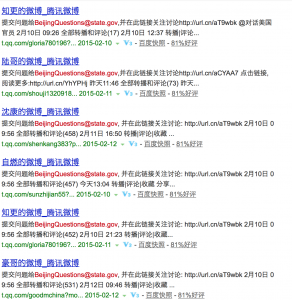 Questions translated by CDT. Answers from the transcript of the dialogue prepared by the State Department.