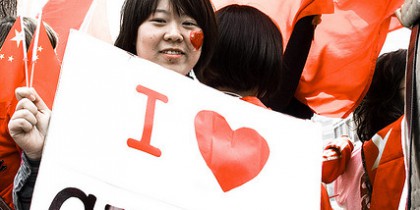 Teasing apart different strands of nationalist sentiment in China at the University of Nottingham’s China Policy Institute Blog, Andrew Chubb warns that “this N-word, in short, needs to be approached with care.”

In the case of China, with its large and diverse population, nationalism encompasses a particularly complex and often contradictory range of phenomena, making it crucial to specify just which aspects of nationalism we are referring to. Suisheng Zhao’s classic study showed how the “state-led pragmatic nationalism” of the ruling the Communist Party, prioritizing economic development and a peaceful international environment, has existed in uneasy cohabitation with liberal and ethnic variants emphasizing, respectively, themes of popular civic participation, and ethnic Han or minority identity.

[…] Not surprisingly, given the party-state’s emphasis on “patriotic education” for young people, respondents belonging to the “post-1990” generation were much more likely to see the maritime disputes as matters of national dignity and humiliation. Yet they were also less likely to approve of (and more likely to oppose) the use of military force in dealing with the issue. This calls into question the commonly expressed concern that, under the influence of “patriotic education”, China’s young people are a dangerously nationalistic generation. We might say Chinese youth are more nationalistic if by that we mean they’re more inclined to connect the contemporary world to historical narratives of victimization. But they’re not more nationalistic in the sense of wanting to go to war. Once again, opposing conclusions are on offer, depending on how we define nationalism. [Source]

See also scholar Zhang Lifan on Beijing’s “expedient nationalism,” writer Yu Hua on the “hijacking of Chinese patriotism,” a 2012 study questioning the state-run Global Times’ reputation for hardline nationalism, and more on the subject from Chubb, via CDT.