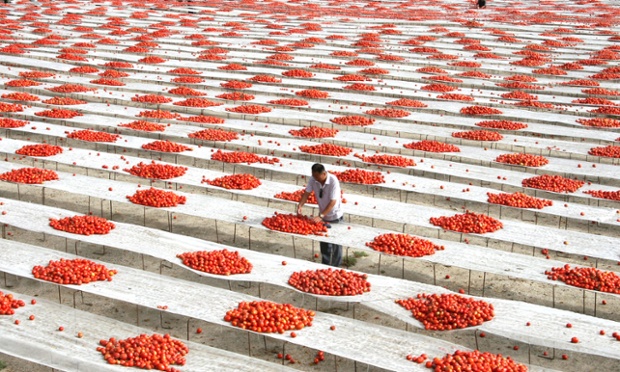 At the Guardian, Jonathan Kaiman looks at the town of Nanzhuang, south of Beijing, where hundreds of farms will be destroyed to make way for the world’s largest airport. With agricultural land giving way to development projects all over the country, it is unclear where China will find the capacity to grow enough food to feed its expanding population:

Nanzhuang’s story is in many ways the story of rural China. For the past three decades an onslaught of urban development, desertification, and pollution has been eating away at the country’s once-endless sprawl of tiny farms. For different people this transformation poses different questions. Nanzhuang’s villagers wonder what they’ll do once their fields are under tarmac. The Beijing government wonders how it will keep its citizenry fed.

“You have urbanisation — people travel abroad,” says Susan Chan Shifflett, an expert on China’s food security, from the Wilson Centre in Washington DC. “They go to France, they see cheese, and they think, ‘why can’t I have brie in China?’ They’re changing their diets — meat consumption has quadrupled over the past 30 years.”

[…] Meanwhile, China must feed a fifth of the world’s population with about 7% of its arable land, according to the UN’s food and agriculture organisation, and nearly half of that land has been “degraded” by decades of unchecked development. “It’s a zero-sum game,” Shifflett continued. “You have less and less resources, but more and more people who need them.” [Source]

As China tries to maximize it agricultural output by relying on huge supply chains, food safety has become a major concern, both domestically and globally. A recent shipment of berries packed in China has reportedly caused a Hepatitis A outbreak in Australia, according to the South China Morning Post:

The department of health in Australia’s Victoria state confirmed the contamination in the latest case had been traced back to China.

“The particular risk that we’ve identified here is that a country that has endemic hepatitis A, that is China, has been involved with packing these berries,” Finn Romanes, the department’s senior medical adviser, told Australian Broadcasting Corp radio.

“Clearly there’s strong evidence that there may have been a contamination during the packing process as they are fully sealed and then transported to Australia.” [Source]