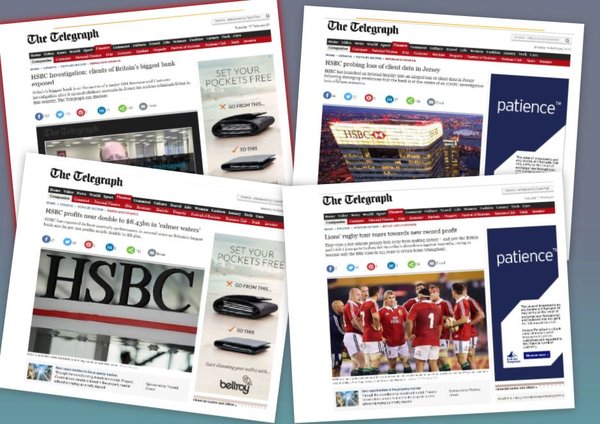 At openDemocracy, The Daily Telegraph’s former chief political commentator Peter Oborne explains his decision to leave the newspaper. He focuses on allegedly soft coverage of HSBC, described by a former Telegraph executive as “the advertiser you literally cannot afford to offend,” and writes that he decided to go public in response to The Telegraph’s thin reporting of tax evasion involving the bank’s Swiss arm (as well as the daughter of former Chinese premier Li Peng). He adds, though, that he was also unsettled by the newspaper’s editorial silence over the protests in Hong Kong late last year:

The reporting of HSBC is part of a wider problem. […]

The paper’s comment on last year’s protests in Hong Kong was bizarre. One would have expected the Telegraph of all papers to have taken a keen interest and adopted a robust position. Yet (in sharp contrast to competitors like the Times) I could not find a single leader on the subject.

At the start of December the Financial Times, the Times and the Guardian all wrote powerful leaders on the refusal by the Chinese government to allow a committee of British MPs into Hong Kong. The Telegraph remained silent. I can think of few subjects which anger and concern Telegraph readers more.

On 15 September the Telegraph published a commentary by the Chinese ambassador, just before the lucrative China Watch supplement. The headline of the ambassador’s article was beyond parody: ‘Let’s not allow Hong Kong to come between us’. […]

[…] A free press is essential to a healthy democracy. There is a purpose to journalism, and it is not just to entertain. It is not to pander to political power, big corporations and rich men. Newspapers have what amounts in the end to a constitutional duty to tell their readers the truth. [Source]

Oborne also discussed his concerns with 4 News’ Jon Snow. The Telegraph has dismissed the piece as “an astonishing and unfounded attack, full of inaccuracy and innuendo,” according to The Guardian’s John Plunkett and Ben Quinn. They add that HSBC placed its advertising with The Guardian “on pause” when it learned of the Swiss leaks story. In late 2013, HSBC pulled its advertising from Hong Kong’s pro-democracy Next Media Limited, publisher of the Apple Daily newspaper, reportedly at Chinese authorities’ request.

A second commentary on the Hong Kong protests by ambassador Liu Xiaoming was published on December 6th, titled “For China and the UK, respect is key.” The Telegraph has published a total of 11 pieces by Liu since 2011, on topics such as Chinese development, Tibet, the Diaoyu Islands, Internet “safety,” the 2012 London Olympics, and trade and other relations between China and the U.K.. One particularly eye-catching contribution compared Japan’s Yasukuni Shrine to an enchanted horcrux from the Harry Potter stories, an argument parodied by Weibo user Maboyong.

Oborne’s criticism of The Telegraph’s Hong Kong coverage is specific to its editorials: its reporters did cover the bar on visiting MPs and many other angles on the protests.