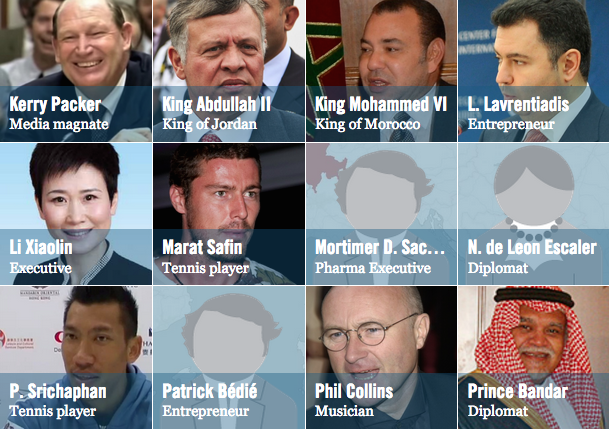 The International Consortium of Investigative Journalists (ICIJ) has released a sweeping report on over 100,000 clients of HSBC’s Swiss branch. Reporters from 45 media organizations contributed research. Among those investors profiled is Li Xiaolin, co-chair of the state-owned China Power International Development Ltd.:

Li Xiaolin, known as China’s Power Queen, co-leads one of China’s state-owned power monopolies and heads the Hong Kong-listed subsidiary that builds and manages large power plants in China. Fortune named her as one of the world’s “50 Most Powerful Women in Business” in 2010 and Forbes put her on its list of “Asian Women at The Top.” ICIJ disclosed in January 2014 that she was the director of two British Virgin Islands companies registered in 2005. She served two terms on the advisory body to China’s legislature. Li has attracted media attention and criticism for her expensive tastes and luxurious clothing. In 2013, The Telegraph reported that Li brokered secret deals to help Zurich Insurance gain a major stake in what was in 1995 China’s largest private insurer, before foreign investment in the insurance sector was allowed in China. Liu Zhiyuan, her husband and grandson of a Chinese revolutionary, formerly worked in the insurance company as a senior executive.

Li and her husband became HSBC clients in 2001. They were beneficial owners of one client account that was connected to five bank accounts that together held as much as $2.48 million in 2006/2007. They were all held under the name of Metralco Overseas S.A., a Panama-registered company that was dissolved in 2012. [Source]

Li has come under fire for sporting luxury coats and suits at the National People’s Congress, and pearls at a lunch with factory workers. She was also previously implicated in a bribery case involving the Swiss company Zurich Insurance. Her father is Li Peng, notorious for his role in the crackdown on protesters in Beijing in 1989.

China ranks 61st among 203 countries with clients of HSBC Switzerland between 1988 and 2007: 246 Chinese clients found among the leaks held a total of USD517 million.

Agence France-Press’s Tom Hancock tweeted that the Ministry of Foreign Affairs removed a question about Li Xiaolin and Gao Jue from Monday’s press conference transcript. Commerce Minister Gao Hucheng appears to have secured a job at J.P. Morgan for his “immature, irresponsible and unreliable” son through an agreement with former J.P. Morgan senior executive William Daley:

Last January, ICIJ publicly disclosed the names of over 37,000 clients of tax havens from China, Taiwan, and Hong Kong, including Li Xiaolin and other “princelings.”