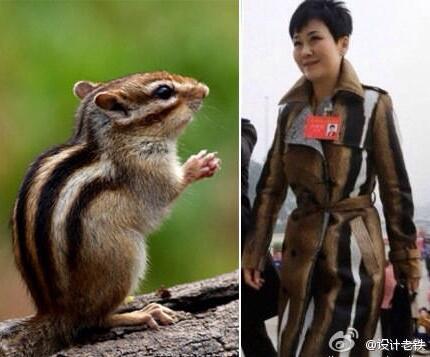 Not for the first time, princeling businesswoman Li Xiaolin has come under fire for her choice of attire. From Laurie Burkitt and Lilian Lin at China Real Time:

Li Xiaolin, the chairwoman of state-run electricity giant China Power International Development Ltd. and daughter of former premier Li Peng, is coming under fire on China’s social networking sites after appearing in a striped, furry-looking trench coat on Monday at the opening ceremony of the 11th National Women’s Congress, a legislative meeting aimed at improving women’s status in China.

Users of China’s Twitter-like social-media site Sina Weibo attacked Ms. Li for her luxury look. “Such an obvious show-off of wealth,” said Zhang Xinke, a fashion designer, on his verified Weibo account. Much of the criticism came from the perception that Ms. Li’s coat was fur. Animal rights groups circulated videos of animal killings next to Ms. Li’s photos.

China Real Time has been unable to verify the brand of Ms. Li’s coat. A spokesman for China Power International Development said, when asked the price and brand, that the coat is “very ordinary.” He declined to provide the price and the brand but said that the material is fabric with leopard print, not fur. [Source]

Leopard was not the animal that sprang immediately to some observers’ minds, however. Via Patrick Boehler:

Weibo users have previously slammed a $2,000 pink suit Li sported at last year’s Chinese People’s Political Consultative Conference, and the pearl necklace she wore during a meal with workers this summer, after which she made a pointed show of frugality by ordering that her leftovers be packed up. Her comments about the sacrifice of having only one child and her proposal to open “a morality file on all citizens to control everyone and give them a ‘sense of shame’” have provided additional irritants.

The presumed luxury of Li’s coat comes amid ever-closer scrutiny of extravagance among China’s officials and ruling class. Its cost likely pales next to the $115,000 pork trotter banqueting tab, $260,000 wedding, colossal $11 million brass puffer fish, and $330 million celebrations planned for Mao’s 120th birthday that have sparked other recent controversies. At least Ferrari owners are exempt from criticism—or should be, according to the company’s chairman Luca Montezemolo, who argued recently that the cars are not luxury items but works of art.