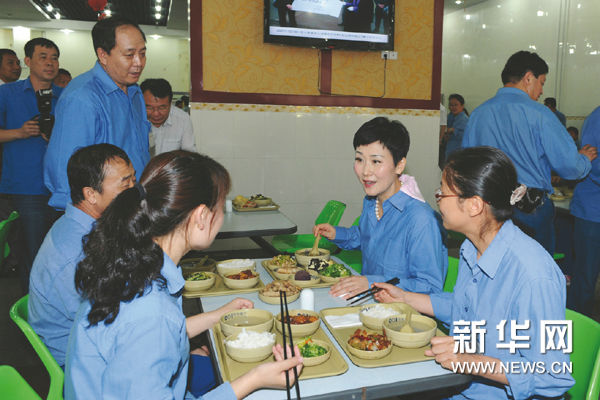 Xinhua reports [zh], “Standing up after her meal, Ms. Li did not forget to instruct her entourage, ‘Pack the leftovers. We shouldn’t waste them.'”

Netizens have called out Li’s public declarations before, like when she spoke of her “sacrifice” in having only one child. This time, Weibo users found humor in the contrast between Li’s frugality and telling details in the photo:

This netizen calls Li “Li Xiao-X” (李小X) to avoid censorship of his/her comment. “Li Xiaolin” was blocked from Weibo search results in July, one week after her “sacrifice” comment.

上海航运经纪人俱乐部吕明: I’m remembering that photo of her in designer clothes and handbag. That was even more ridiculous.

phymon: How many box meals could you buy with that chunky necklace? That suit is so rough that it’s chafing Master Li’s neck. Outrageous! Next time we should have a Chanel suit made.

In the photo, Li is wearing a pink towel on the back of her neck.

ShawnCF: We should give you an award for best actress. It’s a pity that you didn’t go into theater!

Wen Jiabao was the first to be called a movie star for his appearances among the people.

lucky琨: It’s great to have a good dad; even boxing up your leftovers is news.

荣剑2010: Here we have a living Lei Feng from the Li family. She is the model of frugality. She boxes her leftover food and wears work suits instead of big brands.

旷小明律师: Unsolicited flattery may be the omen of a fall.