Drawing the News: The Shared Fate of the Pigsty 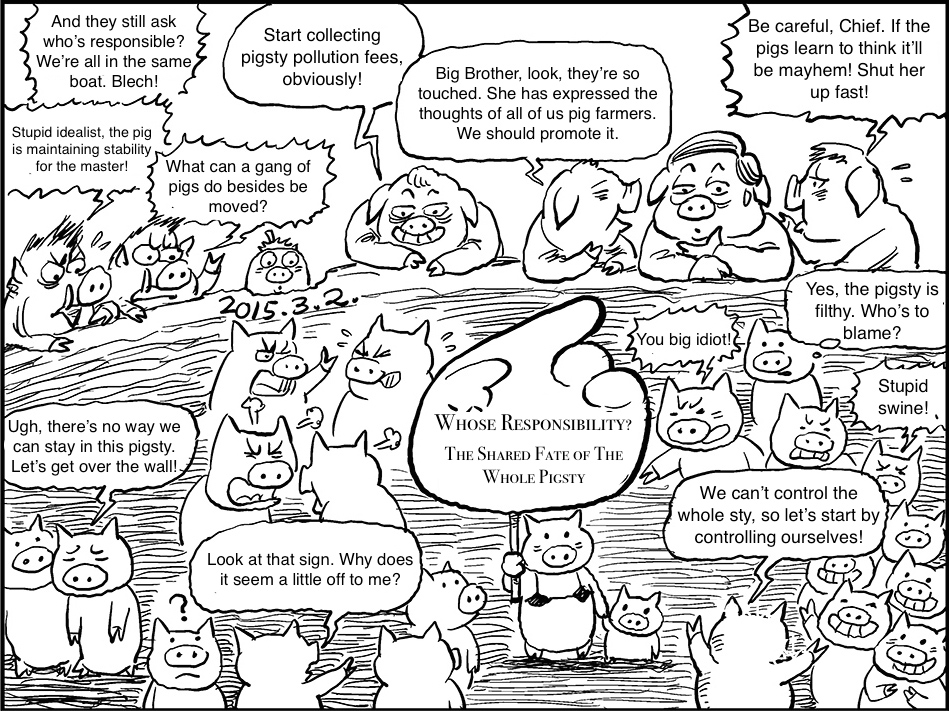 Chai Jing’s documentary about China’s air pollution, “Under the Dome,” went viral over the weekend, tallying over 100 million views on major Chinese video sites. Addressing a live audience as if delivering a TED talk, Chai asks what smog is, where it comes from, and what can be done about it. The reaction online has been overwhelming, and many Internet users hope to see real change emerge from Chai’s investigation. “This is ushering in the true beginning of China’s new century” (这才是迎来中国真正的新世纪的开始), writes @ST_NEET on Weibo.

State media has been central to the success of “Under the Dome,” but the central government is also trying to manage the response. The film was first released on the website of People’s Daily, along with an interview with Chai Jing [Chinese]. At the same time, websites have been instructed to downplay “Under the Dome” and regulate public opinion.

Cartoonist Rebel Pepper illustrates the myriad and varied responses to “Under the Dome” as chatter in a pigsty:

In one corner, a group gets excited about exercising self-control, since they can’t supervise the sty themselves. In another corner, a forlorn pig tells her partner that they have no choice but to flee, or “get over the wall” (the same word for getting past the Great Firewall online). Peering over the edge, two boars complain about the angry response of citizens to the film, while a schemer thinks of all the money to be made on regulatory fees. Back in the pen, a sow points a sign reading “Whose Responsibility? The Shared Fate of the Whole Pigsty” directly at a pig with Xi Jinping’s hair style, who is pondering conflicting advice on whether to promote Chai’s film or not.

Translation and explanation by Anne Henochowicz.